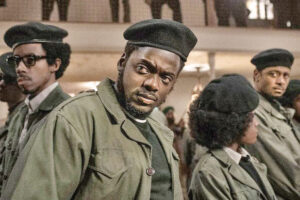 On Dec. 4, 1969, the Chicago Police burst into the apartment of Black Panther Fred Hampton. Equipped with machine guns, rifles, shotguns and handguns, the police not only fired first but discharged upward of 90 shots. The Panthers, according to the findings of a grand jury, fired, at most, a single shot.

Fred Hampton was only 21 years old when he was murdered by police in an illegal home raid in 1969. He was reportedly drugged with a sedative (likely drugged by FBI informant William OâNeal) to prevent him from fighting back. He was then shot twice in the head while sleeping in front of his 9-months pregnant partner, Deborah Johnson (today known as Akua Njeri).

After police removed Hamptonâs pregnant fiancÃ©e from the bedroom, she could hear an officer asking if he was still alive. She says two gunshots were then fired, and then another officer said, âHeâs good and dead now.â

âJudas and the Black Messiahâ depicts the rise and fall of revolutionary activist Fred Hampton (Daniel Kaluuya), chairman of the Illinois chapter of the Black Panther Party in late-1960s Chicago, at the hands of William OâNeal (Lakeith Stanfield), an FBI informant. Not unlike the movements from Malcolm X or Bobby Seale, the way Hampton inspired power and determination through his brash speeches allowed the movements for racial justice to grow bigger and bigger over the years.

As chairman of the Illinois chapter of the Black Panther Party, Hampton founded the multicultural organization, the Rainbow Coalition, and allied his party with other Chicago groups in an effort to end street violence and instigate social change. He was a born leader and speaker, moving hundreds with his words at the protests and educational courses he led â and even more with his confident action.

FBI director J. Edgar Hoover (Martin Sheen) tasks agent Roy Mitchell (Jesse Plemons) with the job of destroying Hampton as part of a larger campaign to infiltrate and undermine the burgeoning Black Panther Party. Mitchell starts off by proving his liberal credentials to OâNeal, indicating his support for the nonviolent efforts of the civil rights movement in contrast to the militant Black Panthers, whom he equates with the Ku Klux Klan. Mitchell is portrayed as a persuasive villain with a soft voice and steady smile that turns increasingly sinister, sometimes creating unintentionally comical effects such as when he appears, magically unnoticed, in an all-black crowd at a Panther rally, rattling OâNeal with the same fixed, unblinking smile.

The British-born Daniel Kaluuya portrays Hampton in a performance that can only be described as electrifying. Here, Kaluuya elevates his game even further as he channels both the powerfulness Hampton carried in public and the tenderness he had in private. Heâs the âBlack Messiahâ foretold and feared by Hoover, whoâs obsessed with Hamptonâs rapidly growing status as an extraordinarily effective socialist organizer. Hamptonâs building of the Rainbow Coalition from the Puerto Rican Young Lords and the Appalachian Young Patriots into a revolutionary movement was more than enough to sound all the right alarm bells in American halls of power. There isnât one second youâre not glued to him while heâs on screen.

Playing Judas to Hamptonâs Black Messiah is LaKeith Stanfield. Stanfield portrays William OâNeal, who was a petty Chicago criminal who became an informant for the FBI as he rose in the ranks within the Black Panthers. OâNeal was the one who sedated Hampton the night of his death â an act he never considered a betrayal. Stanfield gives a twitchy and layered performance that is nothing short of phenomenal.
One could even argue the movie is at its peak in sequences rather than the whole. Things do slow down for a bit of romance between Hampton and another Panther, Deborah Johnson, whoâs played with aching delicacy by Dominique Fishback. In one of the most moving scenes, Johnson reads Hampton a poem sheâs written, expressing both fear and acceptance of the fact that their life of protest will almost certainly end in tragedy.

âJudas and the Black Messiahâ is to be both entertaining and informative. Perhaps most interesting is how well director Shaka King depicts OâNeal, whom King doesnât wholly vilify or pardon. Weâre shown the path OâNeal initially led himself down and how he saw an opportunity to work for the FBI. While itâs an easy decision to make, King lets the audience decide how to perceive OâNealâs actions. My only issue here is the movie doesnât do enough to drive home how young these people were. OâNeal was 19 years old when the FBI got him in their sights. Faced with bullying and intimidated by the FBI, the decision he makes feels less like a choice at all.

âJudas and the Black Messiahâ is a powerful work from director Shaka King and the two leads of Daniel Kaluuya and LaKeith Stanfield. Both timely and historical, make time to check it out. ♦