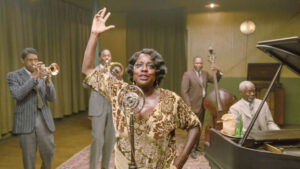 Powerful acting is the engine to âMa Raineyâs Black Bottomâ â a movie about, among other things, the struggle to achieve and maintain control. With a soundtrack that provides an immersive experience for the audience, dialogue seemingly fitting for the time period, and allowing the cast to maximize their talent, âMa Raineyâs Black Bottomâ is captivating from the first note.

âMa Raineyâs Black Bottomâ takes place across a single day in the life of the title character and her band at the recording studio and focuses on relationships, dialogue and theme. Tensions and temperatures rise over the course of an afternoon recording session in 1920s Chicago as a band of musicians await trailblazing performer, the legendary âMother of the Blues,â Ma Rainey (Viola Davis). Late to the session, the fearless, fiery Ma engages in a battle of wills with her white manager and producer over control of her music. As the band waits in the studioâs claustrophobic rehearsal room, ambitious trumpeter Levee (Chadwick Boseman) is determined to stake his own claim on the music industry and spurs his fellow musicians into an eruption of stories revealing truths that will forever change the course of their lives.

Viola Davis shines in this uncommon narrative, which focuses its spotlight on long, uncut, engaging monologues, captivating dialogues, and entertaining banter, all handled effortlessly by every actor involved.

At the recording studio, she is regarded as a menace by both her white manager and the white record executive overseeing the project.

âThey donât care nothing about me; all they want is my voice,â she says with disgust to her bandleader, Cutler (Colman Domingo). âWell I done learned that, and theyâre going to treat me the way I wanna be treated no matter how much it hurt them.â

But itâs Boseman who truly steals every scene with his swagger, charisma and sheer emotional range.

From an impeccable accent to his mind-blowing emotional range, passing through long monologues and uncut takes effortlessly, Boseman is the strong glue that holds everything in place. At the beginning of the movie, Levee is upbeat, jovial and cracking wise for what the future might hold for him, and that heâll have his âown band one day.â But as good natured as he seems, heâs quick to correct those who would talk down to him.

Levee wants to follow his dreams, do what he does best in his own conditions and with his personal interpretation of music and soul. Boseman incorporates this character seamlessly, delivering a memorable performance.

Davis shares the main spotlight with Boseman by representing the iconic blues singer, Ma Rainey, and tackles every single line of hers with brutal intensity and extreme expressiveness. Ruben Santiago-Hudsonâs first feature-movie screenplay is packed with entertaining banter between the band members, as well as heartfelt, gut-wrenching, shocking monologues that deeply explore a characterâs past and personality. The banter between Toledo (Glynn Turman), Cutler, Slow Drag (Michael Potts) and Levee is incredibly amusing and genuinely hilarious at times. However, it goes down a dark path, ultimately culminating in a depressingly unavoidable finale.

Levee has worked hard controlling the âwhite folkâ his whole life and controlling his destiny of becoming a famous musician. As the movie progresses, he loses control. By the end of the movie, Levee is twisted and broken, having succumbed to hate in pursuit of a manhood he could never attain.

âMa Raineyâs Black Bottomâ ended up being a refreshing movie. While Iâd hoped there had been a bigger emphasis on the music, the intensity and fast-paced dialogue made up for it.

Adapted from two-time Pulitzer Prize winner August Wilsonâs play, âMa Raineyâs Black Bottomâ celebrates the transformative power of the blues and the artists who refuse to let societyâs prejudices dictate their worth. ♦