Guy Ritchieâs latest film is a rehashed pastiche of a bygone era. 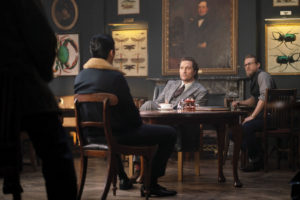 Make no mistake: âThe Gentlemenâ is classic Guy Ritchie. Scoundrels of all sorts cross paths in an ever-widening web of crime, with sequences full of fast dialogue and fast cuts. But, while there is plenty of action and the cast is certainly impressive, âThe Gentlemenâ â and more specifically, Ritchie â succumb to the law of diminishing returns. Too much of anything will eventually lose its impact. This movie feels like a rehashed pastiche of a bygone era (i.e., the 1990s). The genuinely funny and gripping crime stories the director was once known for bringing to life are lacking here, feeling more hollow and contrived in comparison to his more iconic earlier works.

Oddly, it seems like Ritchie is aware of this opinion. He seems to address it in a scene early on in the movie when would-be drug kingpin Dry Eye (Henry Golding) tells weed baron Mickey Pearson (Matthew McConaughey) that the young will replace the old. That this is inevitable. Pearson (a stand in for Ritchie) disagrees, stating that the rule of the jungle is that the strong will devour the weak. Itâs true Pearson is getting older, but he still has his edge; heâs still the king because heâs the best at what he does.

This isnât merely hinted at once then forgotten. Itâs repeated to death so much so that it feels like Ritchie thinks saying it enough will eventually make it true. Instead, it comes off more as a desperate attempt to remain relevant.

But the story is cut and dry. Pearson, an American who settled in London after discovering he could make a fortune there dealing weed, wants to retire. The tale of getting out of the drug game and selling his marijuana empire to fellow American Mathew Berger (Jeremy Strong) is told via a conversation between tabloid journalist Fletcher (Hugh Grant), who wants to blackmail Raymond (Charlie Hunnam), Pearsonâs right-hand man, into paying him not to publish the rundown on Pearsonâs crimes.

Grant employs his trademark charm (and interesting cockney accent) with Raymond throughout the conversation â albeit totally overdone. Fletcher is an unrepentant sleaze ball, mooching food and drink off of Raymond and flirting with him relentlessly. Hunnam, playing a poor manâs Tom Hardy, makes for a solid straight man. Colin Farrell also shines as a true-to-his-word boxing coach for at-risk youth.

Unfortunately, other characters donât fare as well as these two. Jeremy Strongâs Matthew seems to have been told to play a gay stereotype. It comes off as insulting and awkward. Michelle Dockeryâs Cockney Cleopatra to McConaugheyâs Cowboy Caesar could have been much more interesting as her story is forgotten as quickly as sheâs introduced. Sheâs painted as strong yet ultimately needs to be rescued.

Beyond lackluster characters, thereâs a few racist one-liners that Ritchie seems at least tangentially aware veers into problematic territory. When Dry Eye is introduced, Fletcher refers to him as a âChinese, Japanese, Pekingeseâ version of James Bond with a âricense to kill,â and his cohorts are repeatedly referred to as âChinamen.â (Note: Golding is Malaysian-English.)

Thereâs an inherent risk to telling a story within your story. You know that no matter the action thatâs happening on screen, at least the characters who are telling and listening to the story being told to arenât in any real danger. That said, the device of using the discussion to show the narrative allowed the film to ebb and flow with the telling, as you could never fully believe Fletcher when heâd say something happened a certain way. There are a few twists and turns, and itâs entertaining to watch Grant and Hunnamâs back-and-forth.

Although entertaining at times, the plot device of narrating the story comes across more like exposition from these two characters. The fact there was more telling than showing in this movie means the story and movie were overly convoluted and in need of additional work. ♦