âA Beautiful Day in the Neighborhoodâ

A thoughtful, textured contemplation of how we can effectively deal with our expectations, disappointments and imperfections 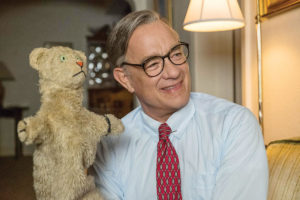 His name was Fred Rogers.

âA Beautiful Day in the Neighborhoodâ starts just as the TV show did, with its iconic song and a preview of whatâs to come. Mr. Rogers (Tom Hanks) speaks directly to the camera and shows pictures of classic characters like King Friday XIII and Mr. McFeely, before introducing a new face covered in cuts and bruises. Weâre told the person is Larry Vogel (Matthew Rhys), a jaded, sharp-elbowed journalist with a penchant for irritating his bosses, who has been assigned to write a profile of Rogers for Esquireâs âheroesâ issue.

Itâs at this point it should be noted that the film follows Vogel far more than Rogers. While âA Beautiful Day in the Neighborhoodâ will likely be described as a biopic, itâs far from a straightforward portrait of the iconic do-gooder, casting him instead as a supporting character in another manâs story. Instead of telling us about Rogers the celebrity, the film focuses on showing us the tangible kindness of the man.

Vogel goes into Rogersâ cheerful Pittsburgh PBS studio looking for flaws he can use to build his feel-good story into something major. But the childrenâs entertainer takes an immediate interest in Vogel and flips the script on who is interviewing whom. Caught off-guard, by the questions as well as the man, Vogel ends up admitting (without much prying from Rogers) something deeply personal from his past: He has never forgiven his philandering father, Jerry (Chris Cooper), for neglecting him as a child. But itâs also whatâs under the surface: Vogel is a new dad himself and can see how he pulls away from emotions and removes himself from his own childâs life to instead concentrate on work or maintaining anger.

What should be a simple assignment for Vogel becomes a gauntlet of character building, as Rogers strives to help the journalist understand and address his inner pain.

This could so easily have been sentimental Hollywood droll about settling family feuds. Instead, itâs a thoughtful, textured contemplation of how we can effectively deal with our expectations, disappointments and imperfections. Rogers gazes at Vogel with laser-focused empathy, gently insisting that he open up. âA Beautiful Day in the Neighborhoodâ is framed as a surreal faux episode of the show, in which the host promises to teach the audience about anger by talking about Vogel.

This re-creation of Mister Rogersâ Neighborhood is sweet and a little strange, which is the perfect description of Hanksâ performance anytime we see Rogers on-screen. Itâs as if Hanks tucks a cozy blanket, embodying the warmth and kindness of Rogers so that every time he appears on screen, you feel better and more hopeful.

One particular scene comes to mind when Vogel and Rogers are having food at a local diner. Itâs one of the most moving 60 seconds of screen time. A deafening roar of silence. Itâs hard to imagine anyone other than Tom Hanks who could make these little moments work, commanding the screen and asking of Vogel (but really of you, dear viewer) to, for one minute, think of all the people who have touched your life and made you who you are today.

However, âA Beautiful Day in the Neighborhoodâ does suffer from certain scenes that are oddly placed. Particularly a dream sequence, which didnât retain the genuineness that was present in the scenes prior to the sequence.

âA Beautiful Day in the Neighborhoodâ is a movie that reinforces the idea and fact that a simple act of kindness can truly leave an everlasting impact on someone. This film reminds you that itâs OK to share and feel feelings. Itâs OK to feel sad at times. Itâs OK to make mistakes. If you ever have any doubts about yourself, watch this movie, and know that Mr. Rogers would say youâre special just the way you are. ♦