The Coods have survived their fair share of dangers and disasters â from fanged prehistoric beasts to surviving the end of the world â but now they will face their biggest challenge of all: neighbors. In search of a new place to live, the first prehistoric family sets off into the world in search of a safer place to call home. When they discover an idyllic walled-in paradise that meets all their needs, they think their problems are solved â except for one thing. Another family already lives there: the Bettermans. The Bettermans (wink wink, get it?) are a couple of steps above the Croods on the evolutionary ladder with their elaborate tree house, amazing inventions and irrigated acres of fresh produce. When they take the Croods in as the worldâs first houseguests, it isnât long before tensions escalate between the cave family and the modern family. 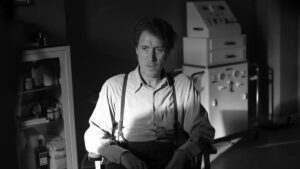 âLast Callâ tells the story of one of the 20th centuryâs most influential lyrical poets, Dylan Thomas (Rhys Ifans). The story begins in New York City on Thomasâ final tour in 1953 â a tour that was meant to save him from ruin. The Welsh poetâs reputation for heavy drinking and philandering would soon be forgotten as eager audiences are captivated by his poetry lectures. Full of poetry, passion and an ultimate betrayal, the poet rages, loves and fights against the gathering darkness. One day at the local White Horse Tavern, he drinks 18 double scotches, naming each one after his life experience. Soon his fantasies, his memories and an uncertain present blend into a wild, surreal farewell to the world. 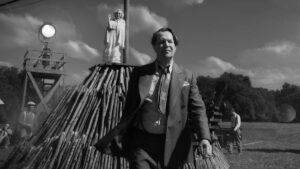 In the 1930s, screenwriter Herman J. Mankiewicz (Gary Oldman), a.k.a. Mank, is nursing a broken leg at the North Verde Ranch outside of Los Angeles. While resting there, heâs hard at work on a script for an upcoming movie that will be known as âCitizen Kane.â Orson Welles (Tom Burke), 24, who has been given carte blanche by RKO Pictures to make any film he wants, gives Mank a deadline of 90 days to produce a first draft. Flashback to a few years earlier, as Mank hangs out at William Randolph Hearstâs estate and becomes friends with rising starlet Marion Davies (Amanda Seyfried). He also works with legendary movie moguls David O. Selznick (Toby Leonard Moore) and Louis B. Mayer (Arliss Howard). All of his earlier experiences find their ways into the âCitizen Kaneâ screenplay, which will go on to be considered one of the greatest movies of all time. ♦