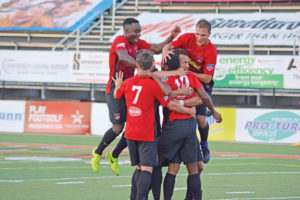 Date: July 8, 2017: Menace players celebrate the game-winning goal by Ramone Howell (10). At the top of the crowd are Mueng Sunday (left) and Eli Lockaby (right). Photo by Joe Sprunger

The Des Moines Menace is Iowaâs premier soccer franchise. As the team gears up to celebrate 25 years of on-the-field excellence, some fresh faces are set to lead a retooled team into the next quarter century.

After joining the Marine Corps in 1993, Tiley Nunnink traveled the world extensively including stays in Asia and Europe, but his heart never left the soccer field.

âIâve always had a foot in soccer,â he says. âNo pun intended.â

While serving in the military, Nunnink did spot duty working as a high-level scout and also at youth academies. Upon retiring from active duty, the Kansas City native and lieutenant colonel looked to return to the action on the pitch. Although his competitive playing days are over â he played collegiate soccer at Cal State Bakersfield â Nunnink landed a job as an assistant coach for San Jose Stateâs menâs college program for the 2016 season. In 2017 his passion brought him to Des Moines to help as an assistant coach under his long-time friend and former Menace Head Coach John Pascarella.

Menace officials were impressed with Nunninkâs soccer acumen, and this offseason the team promoted him to general manager â he succeeds Matt Homonoff, who served in that role since 2012. 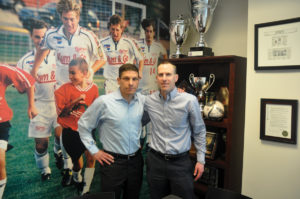 Tiley Nunnink, the new general manager of the Des Moines Menace, and Adam Small, the Menaceâs director of marketing, are looking forward to the teamâs upcoming campaign.

On the upper left corner of the Menace logo is a yellow star denoting the teamâs 2005 Premier Development League (PDL) championship. The lieutenant colonel is now in charge of assembling the Menace roster. Adding another star is the teamâs goal each and every year, and Nunnink says he has ample reason to be optimistic for the future.
âThe Des Moines Menace is very well known outside of Des Moines,â he says. âThere is no MLS (Major League Soccer) coach out there that doesnât know the Des Moines Menace.â

âOne of the things the college coaches want to do,â says Nunnink, âis they want to place their players in a good environment.â

The PDL isnât professional soccer. Players canât be paid â although some do get help with apartments, food, living expenses and jobs. Most Menace players are in college and working to advance to the next level by using their offseason to improve. College coaches trust Des Moinesâ organization to keep their players well coached and well taken care of from a physiological standpoint. A quarter century of Menace excellence and positive experiences for players is the teamâs biggest asset in acquiring players.

âThe college coaches donât want them coming back broken,â says Nunnink. âAnd the players know that if they are here, they are going to be playing against some of the better talent around, and they are going to be improving.â
Players also know that pro teams know of the Menaceâs reputation and watch the club for talent. Under the right circumstances, Menace players are only one phone call away from playing professionally. Thirty-five Menace alumni have eventually made their way to the MLS.

âAnd we get a good crowd,â Nunnink adds. The team consistently ranks at or near the top of league attendance. 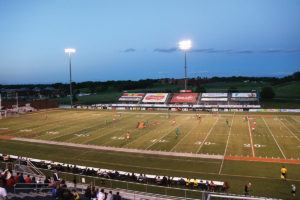 Both the Menace menâs and womenâs teams play home games in front of loyal supporters at Valley Stadium in West Des Moines. The family friendly atmosphere offers entertainment for all ages. The teamâs home opener is Thursday, May 24.

Win, lose or draw, Menace players sign autographs for fans after each home game, says Adam Small, the Menaceâs director of marketing. That is one of the many promotions the team offers to bolster its fun and entertaining atmosphere, which, along with the on-field success, is why the team can boast such large home attendance numbers.

âWe are all about delivering moments for the fans and those become great memories,â he says. âThatâs what people hold onto. When you come to a Menace game, there is lots of interaction. We try and create the friendliest possible environment to enjoy warm summer nights at Valley Stadium. It is everything from pregame â with kids down
on the field giving high fives to the guys as they are coming out for national anthems â to all the fun during the game and halftime promotions down on the field to postgame autographs after every game, win, lose or draw. Those are the things people hold onto.â

Small adds that the Menace organization is all about supporting Des Moines and is always looking to make its fan experience better.

âI think we are a very human organization,â he says. âUp close, we get to know these players. And then the fun thing is you get to see them when they go on to the pros.

Then you see them on TV and see them in the MLS or maybe even in the World Cup.â 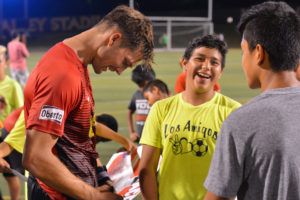 During the offseason, John Pascarella â last seasonâs head coach â was hired by Major League Soccerâs Minnesota United to coach its goalkeepers. The vacancy allowed the Menace to promote Alen Marcina. Aggressively pushing the action on the field is something Nunnink expects to see from the new coach.

âHeâll take some risks to go forward,â Nunnink smiles, noting Marcinaâs preferred style of play. âAnd so I think you will see some goals scored. Hopefully there will be more on the opponents and not us, but I have faith in that.â

After hanging up the cleats as a professional player, Marcina began his career as an assistant with the San Antonio Scorpions in 2012. By 2013 he was promoted to interim head coach, and he eventually became the teamâs full-time head coach for two seasons. During his tenure, Marcina led the franchise to a 2014 victory in the NASL Soccer Bowl. After the team was disbanded, Marcina took the reins for another NASL team. He worked as a Menace assistant coach last season.

Nunnink is glad Marcina is leading the team. He says Marcina has a knack for identifying talent and developing team chemistry.

âHe likes a type of player that is explosive,â Nunnink says, âplayers that will take you on.â

Together, the new coach and GM are recruiting a roster that they hope is good enough to extend the Menaceâs four straight PDL playoff appearances. But Nunnink says the team wonât be set until closer to its first match â May 24 against WSA Winnipeg. He likes how the team is shaping up so far, though.

âWeâre looking pretty good on what we see with our roster,â he says.

The Menace lost in the second round of last seasonâs playoffs. The whirlwind season was a roller-coaster ride of highs and lows throughout the teamâs 14-game schedule. Drama punctuated the season as the teamâs late-season push enabled a playoff berth and a first-round postseason victory. The surge ended with a 2-0 loss to the Thunder Bay Chill.

The majority of the 2017 Menace roster has departed, but two key veterans â defender Brandon Fricke and midfielder Mueng Sunday â return to bolster a talented crop of newcomers that Nunnink is excited to see play.

The MLS is the highest level of soccer in the nation. The USL is the second division, and after the USL comes the PDL, according to Nunnink.

âIt is the highest level of amateur soccer,â says Nunnink. âEveryone is coming to compete. All of these games are nail biters.â 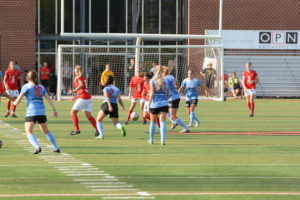 The Menace women kick off their seventh season on June 2. Photo by Joe Sprunger

The Menace women are part of the Womenâs Premier Soccer League (WPSL). The women kick off their seventh season on June 2. The team is led by Head Coach Justin Vorster. The Menace women also play some home games at the Valley Stadium, where the family friendly atmosphere offers entertainment for all ages. 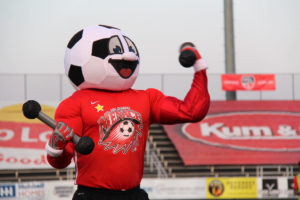 The mascot of the Des Moines Menace soccer club is named Maniac. Maniac makes life interesting
during games and especially at halftime. Photo by Antonio Rodriguez