Wonât you be my neighbor? 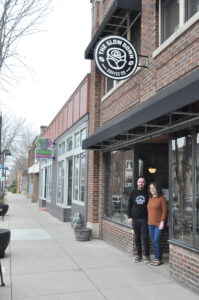 After getting engaged in the community and the Highland Park Neighborhood Association, Drew and Kara Kelso recognized a need for additional venues for people to meet socially in their neighborhood. To meet this demand, the Kelsos opened The Slow Down Coffee Co. at 3613 Sixth Ave. Photo by Jeff Pitts

A map of Des Moines outlines the 52 official neighborhood associations chartered by the city. These groups of hard-working volunteers aim at bettering the spaces surrounding their family, friends and anyone who lives nearby. Too often, local headlines are dominated by negativity, but these salt-of-the-earth laborers deserve recognition. We hope you enjoy meeting a few of the fine folks who deserve pats on their backs. We certainly did.

âIt was going to disband that night,â he remembers.

Only a handful of members attended, and the group was largely uninvigorated. But Drew, discouraged by national politics and its seeming futility, was eager to take local action. Affecting change on a presidential scale felt impossible, but getting things done in his own backyard? Drew knew he could accomplish worthwhile objectives locally that would be of help to people.

Kara Kelso, Drewâs wife, didnât attend that first meeting. After two-and-a-half hours of waiting for her
husbandâs return, she started wondering what kind of calamity could have befallen him. Sheâd soon learn
that Drew was the newly elected vice president of the Highland Park Neighborhood Association.

That was four years ago. Much has changed in the area since then, and Drew is excited to see even more positive developments in the future. Riverview Parkâs grand reopening is scheduled for Friday, June 4. Hiland Bakery has been refurbished and operates under new ownership. A remodeled Chuckâs Pizza will reopen soon. Highland Parkâs main thoroughfare, Euclid Avenue, will take part in a Three Lane Pilot Project, converting the main drag along Second Avenue to 12th Street into a three-lane cross-section roadway which will induce slower traffic and make room for on-street parking on both sides of Euclid â between Sixth and Second avenues.

Highland Parkâs commercial area hit a rough patch at a time that roughly correlates to its removal of on street parking along Euclid. The hope is that slowing traffic down might multiply the current progress being made at the north-side shopping district.

In addition to these and other area upgrades, the Kelsos recently opened The Slow Down Coffee Co. at 3613 Sixth Ave., across from Chuckâs and next door to Hiland Bakery in the old Hiland Park Hardware space. The shop offers customers a chance to slow down a bit, just like the drivers on Euclid, and enjoy the company of a local friend while sipping something tasty.

In order to focus on the shopâs operation, Drew has stepped aside from neighborhood leadership duties. But helping the community thrive is still the goal. He thinks the coffee shop is doing just that.

âWeâre really excited to see neighbors meeting up and being a gathering place for people in the city,â he says.

You find out who your friends are…. 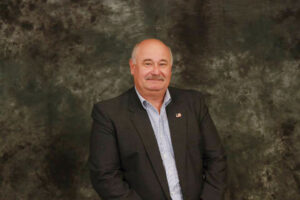 Jeff Witte serves as president of Fairmont Park Neighborhood Association and Northeast Neighbors and Friends, which is a collaboration of 15 northeast Des Moines neighborhoods. Photo submitted

That was the answer when a Fairmont Park resident applied for what should have been a routine but necessary permit for making improvements to her home. The City of Des Moines requires these sorts of permits when homeowners make significant modifications to real estate, but…

âThe city, in October of 2019 â in the area west of I-235, and south of Guthrie to Easton â they rezoned them to industrial (from residential),â explains Jeff Witte, president of Fairmont Park Neighborhood Association.

This new classification might sound harmless, but it meant that a handful of homes in this neighborhood, and a few dozen houses elsewhere in the city, could no longer pull the required permits in order to undertake important construction projects.

And like a good neighbor… The Fairmont Park Neighborhood Association rallied neighbors and alerted City Councilperson Linda Westergaard. Together, the group went to work, along with the Des Moines City Council, to alleviate some of the short-term hardship, and they are now working toward a long-term solution.

âThatâs just one of the projects weâre working on at Fairmont Park,â says Witte.

Helping out at Garton Elementary School, at 2820 E. 24th St., Des Moines, is another of the many endeavors of the association that Witte is proud of. Garton is a âmagnet schoolâ that offers courses or resources that are unique or in high demand. These schools attract students from all around the area and not just from its own neighborhood. With hundreds of kids coming in on a regular school day, Witte noticed that too many were in desperate need of winter coats.

And like a good neighbor… Witte and the Fairmont Park Neighborhood Association have repeatedly endeavored to raise money to procure coats in order to offer them to the children in need.

Amplifying the voice of 63,000 residents within 15 neighborhoods…

Northeast Neighbors and Friends is more than a single neighborhood association.

âWeâre a consortium of neighborhoods,â says Witte, who works double duty by serving as president of this group and the Fairmont Park Neighborhood Association (mentioned previously). These 15 northeast Des Moines neighborhoods band together to form one cohesive association in order to better serve the interests of its 63,000 residents. The group advocates for civic improvements and reforms for the
benefit of the northeast area of Des Moines.

Hosting political candidate forums, opposing unpopular commercial development and raising money and providing resources for schools are all things the group has done well, according to Witte.

âWeâve had a lot of success,â explains Witte.

As the president of both his own neighborhood association and the Northeast Neighbors and Friends consortium, Witte has learned a thing or two about organizing neighbors.

Thatâs because, previously, when he didnât get this message out, after certain hot-button issues were covered, people would get up en masse to leave, often right in the middle of a guest speakerâs presentation. It seemed disrespectful.

âIâm not a dictator,â he says. âIâm trying to run a meeting, and we have a lot of good qualified people involved.â 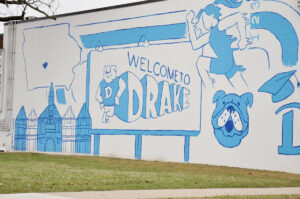 The mural at 25th Street and Carpenter near the Varsity Cinema welcomes people to campus at Drake University. Likewise, recent commercial developments in the neighborhood surrounding the school might welcome an increased level of interaction between the university and the community. Photo by Jeff Pitts

Millions of dollars infused into Dogtown…

Drake-area neighbors are getting stuff done.

The Drake area is one of the oldest neighborhoods in Des Moines. Its residential boulevards boast mature trees and turn-of-the-century homes, and it is home to one of central Iowaâs most diverse populations, but despite some positive attributes, the area has struggled at times with economic development.

Dawson Urquidez has spent months as an intern working in the schoolâs Office of Community Engagement and poring over archives from student newspapers and other local media outlets. The first-year honors student is compiling a comprehensive history of Dogtown, and while doing so, he has picked up on an interesting pattern that might bode well for what is happening right now in the area.

âDrake is more than it appears on the surface,â he says. âThe mid 1950s and 1960s were the Golden Age of Drake, and it was really attractive because of the interaction between the school and the community. â¦ The relationship between the University and community…they became almost as one.â 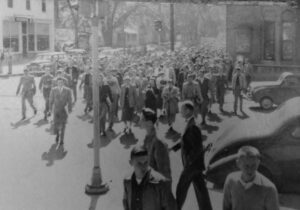 A crowd of students, circa 1951, on a standard school day. Photo submitted

During that era, Urquidez points to community events and happenings that promoted that near inseparability. He found stories about beard-growing contests judged by Dogtown barbers, art exhibitions held in conjunction with the school and the community, and, of course, the Varsity Theatre played a role by attracting portions of every available demographic.

With the millions of dollars being poured into the area near Drake, and with the potential for millions more still to come, the current revitalization effort could draw droves of apartment dwellers, retail shoppers, foodies and people looking to have a nice time. If so, the fun will be happening right alongside Drakeâs campus, right where itâs likely to induce a similar type of interaction with the school and the community as it did once upon a time. If you throw in the fact that the old Varsity movie theater is being overhauled, and if you compare the sum of these parts to the neighborhoodâs prior recipe for success, the one pointed out by Urquidez, it could be that the Drake Neighborhoodâs future might be so bright that Griff the Drake Bulldog mascot will need to wear shades. 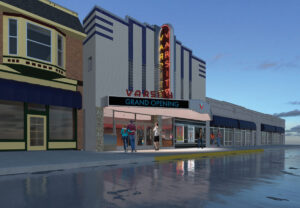 COMING SOON: This is a rendering of what the movie theater could look like when it starts
screening next year. Photo submitted

Get your popcorn ready!

Des Moines was once home to an array of historic movie palaces. But these local theaters have all disappeared, except for one.

Ben Godar of Des Moines Film works as the director of the nonprofit that operates Varsity Cinema just north of University Avenue on 25th Street near Drake University. He says fundraising is underway to renovate the historic venue and that they have raised about one-third of their $3 million goal. If all goes as planned, the Varsity will be hosting film screenings by early 2022.

In the meantime, the Varsity offers a slate of virtual showings that are in line with what you can expect when the doors open. Programming at the historic theater will offer arts-based films, says Godar. Other potential film options include kids programming, midnight movies, independent films and genre flicks. 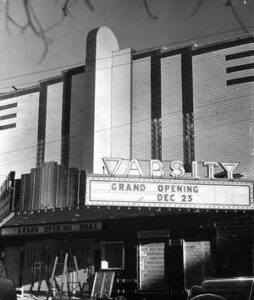 THEN: The historic Drake area movie theater known as the Varsity first opened in 1917. Photo submitted

Art house films and other attractions will soon return to the big screens at the renovated movie theater, but for now, movies are showing online virtually.

The theaterâs restoration includes more than just a facelift. Highlights include what will be a newly installed 45-seat auditorium upstairs; and the lobby will be expanded along with its offerings that will include wine, beer and alcohol.

Des Moines Film is a nonprofit dedicated to growing a vibrant local film culture. Since 2015, the group has produced a variety of unique events, brought a diverse mix of films to Des Moines, and offered educational opportunities and financial support for local filmmakers. The remodeled theater in Dogtown will offer year-round, arts-driven programming. ♦