Witness the on-ice action at Wells Fargo Arena as the Iowa Wild take aim at a return to the playoffs while offering an unforgettable fan experience. 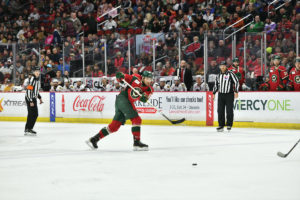 The Iowa Wild made franchise history last season. For the first time in its six-season existence, the team reached the American Hockey League (AHL) playoffs â faltering in the second round against the Chicago Wolves, the eventual Western Conference champion.

Iowa plays in the AHL, one step below ice hockeyâs highest level, the National Hockey League (NHL). The AHL serves as the top developmental league for all 31 NHL teams. Nearly 90 percent of current NHL players are American Hockey League alumni, and more than 100 Hockey Hall of Fame members have laced up skates in the AHL. Last season, more than 6 million fans attended AHL games. The Iowa organization supports the Minnesota Wild.

The Iowa Wild finished with a franchise record 37 victories during the 2018-19 campaign, and central Iowa broke records watching the wins pile up. The team reported nearly a quarter-of-a-million fans (243,558) for its regular season home games, and 27,505 more attended Wells Fargo Arena during its playoff run.

Last seasonâs success coincided with the arrival of new Head Coach Tim Army and his three decades of coaching experience â including stints in the NHL, AHL and NCAA.

Penetrate the guts of the ice! 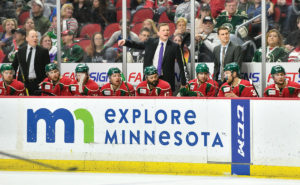 In his second season with the Iowa Wild, Head Coach Tim Army has big plans for the Iowa Wild to pursue playoff hockey and possibly a Calder Cup. Photo credit: Iowa Wild

Iowa Wild Head Coach Tim Army has a need for speed, a plan to penetrate the guts of the ice, and an eye on returning to the AHL playoffs for some unfinished business. Boasting elite prospect Kaapo Kahkonen between the pipes and some fast-skating offseason additions, the team is taking aim at bringing more playoff hockey to town.
After installing an aggressive and fast-paced brand of offense in his first season in Des Moines, Army led the team to unprecedented production. Netting 242 goals, the Wild averaged more than three goals per game, a new team record.

âMaking the playoffs was the goal we had set for ourselves and the expectation,â says Army. âI think we were able to redefine the way we play.â

The coach says it is too early to say which players will for sure be on this yearâs squad â the teamâs roster wasnât yet set as of CITYVIEWâs press deadline â but whoever laces up the skates in Iowa, the coach is excited for the puck to drop Oct. 4 at Wells Fargo Arena for the teamâs home opener and first game of the season.

The Wild will miss some key players from last season, but depending on how things shake out during final tryouts, the team could return all but four players from last seasonâs record-breaking campaign. Army says his players laid a sturdy foundation to build upon in regards to the off-ice atmosphere as well as the on-ice play, and he is looking forward to his second year behind the bench.

Key departures from the Iowa Wild include Cal OâReilly. Last seasonâs star center, captain and points leader signed with Philadelphia during the offseason. Andrew Hammond â who tended goal for more than half of last seasonâs victories â will also be missed. The goalie signed with Buffalo last summer.

Achieving on-ice success for AHL teams is a delicate balance. The teamâs primary function is developing prospects for the organizationâs big league club. But according to Army, player development is done best while winning games, and the team should do more of that in the near future.

âThis year, the playoffs are again the goal,â he says. âAfter that, the philosophy is to take it one step at a time.â
Playing aggressively is critical to accomplishing Armyâs game plan, and that requires speedy skaters.

âWe want to be built on speed,â the coach says. âWe want to press with our speed with and without the puck.â

Coaching, goaltending and injuries are all major factors for AHL success. No one can predict injuries, but Army is widely considered to be a top AHL coaching talent, and the team likes its prospects in the net.

Kaapo Kahkonen should be Iowaâs starter between the pipes. He led the team in goals against average last season as a rookie, and he recorded a franchise record shutout streak of 222:22.

âKaapo Kahkonen returns if he doesnât make the big club, and we have Mat Robson (from the University of Minnesota),â says Army. âHe will replace Andrew Hammond with Kaapo, so we really like where our goaltending is at.â

No matter how the final roster fits together, with the additions the team made during the offseason, Army says his squad could be even faster than it was a year ago. He is counting on that to help the team improve its record away from its home ice at Wells Fargo Arena, which is an area the team needs to improve on if it wants to exceed its expectations.

âWeâre excited about our group,â says Army. âWeâve added some speed and size to our lineup. We were fast last year. We are faster this year, and we are a little bit bigger. The extra speed will allow us to penetrate the guts of the ice with more speed and more pace. If we can get in there more often, we will produce more, and that will allow us to have more success on the road this year.â 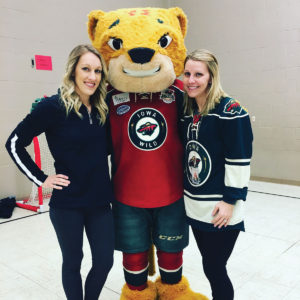 Allie Brown (left) didnât know much about hockey when she began working for the team six years ago, but she now serves as the teamâs senior director of marketing. Photo submitted.

Allie Brown is hooked on hockey, but that hasnât always been the case.

âI did not know anything about hockey when I started this job,â admits the teamâs senior director of marketing. âIt has been so much fun learning. It is such a fun sport. It is very fast-paced, more than any other sport, and itâs very fluid. It has been a lot of fun.â

Wild games draw an array of attendees including varying ages and demographics, according to Brown. Non-hockey reasons to attend Wild games include a Kids Zone, a plethora of giveaways, pre-game music concerts, free post-game ice skating (skate rental is $2) and weekday promotions such as dollar-dog nights. Young professionals, date-nighters, college students, hockey fans, seniors and kids all have reasons to witness the Wild action.

âIt is a fun evening out to have fun with your friends, grab some beers or bring family or friends,â she says. âIt is a very social atmosphere, and there is a lot going on.â

âApart from the play on the ice, there is a ton of other fun activities and promotions surrounding the game to keep fans entertained,â she says.

The in-game atmosphere offers energy, excitement, and, according to Brown, it is not just about hockey.

âYou are constantly being entertained with other things, with music and different games that are fun for adults as well as kids,â says Brown. âThere are so many fun promotions for people other than hockey, and then, hopefully, they come and have a good time and enjoy the sport and get hooked on hockey.â

Allie Brown hasnât always been hooked on hockey, but thanks to the Iowa Wild, now she is addicted. 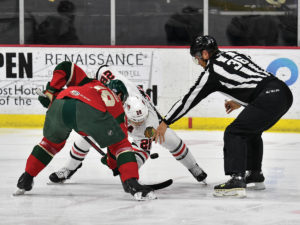 The puck drops at 7 p.m. on Oct. 4 at Wells Fargo Arena for the Iowa Wild 2019 Home Opener. The season begins on fresh ice as the team takes on the Rockford IceHogs. Attendees will receive a free 2019-20 Iowa Wild schedule cup.

Oct. 11: Stranger Things Night (vs. Texas).
Oct. 12: Hoptoberfest (vs. Texas).
Nov. 10: Pucks & Paws Game 1 (vs. Ontario), March 28: Pucks & Paws Game 2 (vs. Rockford) Pucks and Paws Night has been so popular that the team added a second event to this seasonâs promotional schedule.
Nov. 23: Hockey Fights Cancer (vs. Bakersfield). The gloves come off at this new event.
Nov. 24: Free Wing Night (vs. Bakersfield). Fans roll up the sleeves and feast on free wings.
Dec. 7: WWE Night and Red Kettle Game (vs. Tucson). WWE Night with a special guest appearance by a yet-to-be-named star.
Dec. 21: Iowa Hockey Classic (vs. Grand Rapids). The Des Moines Oak Leafs and Des Moines Capitals â two local high school teams â will compete in junior varsity and varsity level contests on the Wells Fargo Arena ice ahead of the Wild game against the Grand Rapids Griffins. For the price of a single ticket, fans get the chance to see all
three games. The event will also celebrate the history of hockey in Iowa.

Pre-game concerts: The team will also offer a series of local live music events, but as of CITYVIEWâs press date, the dates and bands had yet to be released. 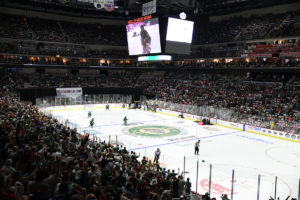 Skaters for the Wild will wear specialty jerseys on three nights this upcoming season: Dec. 21 vs. Grand Rapids for the Iowa Hockey Classic, Feb. 8 vs. Stockton for Pink in the Rink and March 15 vs. San Antonio for Star Wars night.

The Iowa Wild ice hockey team plays in the American Hockey League, just one step away from the NHL. The team plays home games at Wells Fargo Arena, 730 Third St., Des Moines. Visit www.iowawild.com for other details and ticket information.

Dates, times and other details are believed to be accurate, but changes are inevitable. Be sure to verify the information as the competition nears. 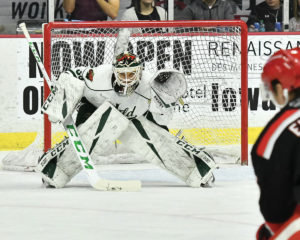 The puck drops at 6:05 p.m., Oct. 5 at Buccaneer Arena for the teamâs home opener against the Fargo Force. The Bucs play home games at 7201 Hickman Road in Urbandale. Also known as âThe Madhouse on Hickman,â the venue contains 3,261 seats and boasts a maximum capacity of 3,700.

What level of hockey is this?

This is not professional hockey. The players are not paid. Junior A hockey is the highest level of amateur hockey before college. Most Buccaneers and players in the United States Hockey League (USHL) range in age from 16 to 20, and they are working to earn collegiate scholarships. Many players travel some distance to play for the team and live within the homes of central Iowa âhost familiesâ or âbillets.â

The Des Moines Buccaneers ice hockey team was established in 1980. Prior to last season, the once-storied franchise had struggled, missing the playoffs in nine of the previous 10 seasons. That changed in 2018-2019. Before the start of the season, the teamâs new ownership group â which includes homegrown hockey hero and long-time NHL goalie Scott Clemmensen â shook up the front office, and the team eventually flourished, making the playoffs before losing to the Tri-City Storm in the USHL semifinals. The head coach who spearheaded last seasonâs turnaround, Gene Reilly, has moved on. In his place is Peter Mannino. The new head coach looks to build on last seasonâs success and continue the franchiseâs revitalization.