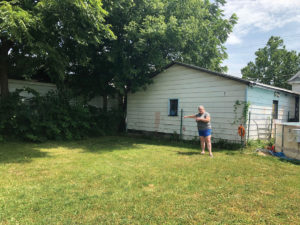 Residents from nearly 5,500 homes surrounding the Iowa State Fairgrounds will allow fair-goers to park in their yards during the 11 days of the fair this month.

Isaac Swieter is one of those residents. He started parking cars in his yard when he moved into the neighborhood in 2004 by default. He was remodeling his house on Capitol Avenue, 1.5 blocks away from the Grand Avenue gate and left for work. When he returned, he couldnât park in his driveway or his yard. He didnât recognize any of the cars that were parked there, and the police were unable to help him get the vehicles towed.

âI had to bicker and fight with people when they came back to get their vehicle,â Swieter says. âAfter that first Friday in 2004, I essentially donât leave my house.â

For the remainder of that fair season, he parked cars in his front and backyard. To this day, he parks 10 cars in the back and nine in the front.

The neighborhood surrounding the Fairgrounds is needed for parking, State Fair officials say, because between 3,000 and 5,000 vehicles can park on the Fairgrounds and an estimated 80,000 to 120,000 people attend each day of the fair. The fair also works with DART for a Park and Ride, where fair-goers can park at Southeast Polk High School or Junior High and ride to the fair.

âThe public that live around the Fairgrounds that allow parking in their front yards provide a big service,â says Kenny Hargis, parking supervisor for the Iowa State Patrol. âThereâs a lot of people who park. Otherwise, people would be parking who knows how far away if the neighbors didnât allow them to park in their front yards.â 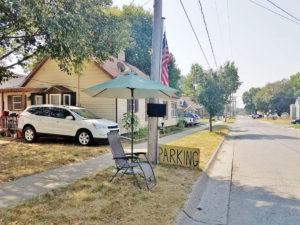 Isaac Swieterâs setup during the State Fair
season includes a television and chair,
where he sits to watch Fox Sports.

Officials will have a better idea of how many parking spots are inside the Fairgrounds after this yearâs season, Hargis says. A couple hundred spots were lost with the construction of the new Gate 13 entrance.

Between 1,500 and 2,000 cars can fit in the north lot; another 1,500 can park in the University Avenue lot if it doesnât rain. Rain causes portions of the lot to become too muddy for parking. Another 2,000 vehicles can be parked
in the northeast lot.

The only paved parking at the fair is handicapped parking. Paved parking would be nice for fair-goers, Hargis says, but itâs difficult to justify spending the money for an event that lasts 11 days out of the year. 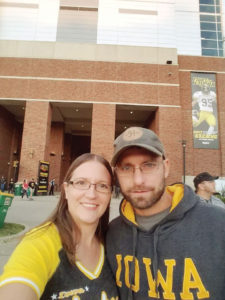 The State Fair charges $10 for on-site parking. While the lots require fair-goers to walk to activities, concessions and rides, members of Shriners International drive golf carts and give rides into the grounds for a free-will donation. Thereâs also a tram that gives fair-goers rides from Gate 13 to the bottom of the hill in the northeast lot. It runs an hour after the concert to bring people back to their vehicles.

There are times when the Fairgrounds parking lots get full and close.

âOnce we get enough people that have left, we reopen it, and itâll be open the rest of the night,â Hargis says.

When fair officials make changes to parking or close a gate, it affects how much money residents make. When the northeast lot first opened, some residents initially noticed a decline in parking revenue. Once they decided they didnât want to walk from the parking lot to the fair, they went back to parking in neighborhood yards, Swieter says.

Through the years, Swieter has developed a system that he thinks is most effective: He does mostly chauffeur parking. Parkers pull in under a shade tree, gather their items and wait while Swieter parks their car. He gives them their keys, and they head to the fair.

âThatâs the best way to do it,â he says. âItâs a game of inches, and a few inches makes it difficult for people to get in and out. It keeps liability at a minimum. Nobody hits my house, and nobody hits anyone else.â

Swieter considers the service he provides a true business and keeps his customers in mind. He doesnât want anyone to be trapped in his yard or for their vehicle to be damaged.

Swieter sets up for customers about 7:30 or 8 a.m. The majority of his parking is reserved, and many of his customers have been coming to him long enough that the kids who used to be in car seats are now driving to the fair on their own. He stays out until the last customer leaves for the night, which could be 10:30 p.m. or 2 a.m.,
depending upon whether thereâs a concert.

âI start with my vehicles and make sure everything is good,â he says.

Swieter says itâs necessary to stay out because there have been other fair-goers who have tried to fight in his yard or driveway. Last year, he helped apprehend an individual who was trying to break into vehicles in a yard across from his.

Residents have many stories through the years of what itâs like to handle break-ins, those who have drank too much or people who are simply unhappy. Vince Cooper, who lives on Logan Avenue, has been parking cars in his lawn for 21 years. His mother-in-law lived in his house before he and wife, Sharon, and she parked cars before they moved in.

Cooper has had intoxicated individuals wake him up early in the morning. Heâs threatened to contact the police. Heâs had to kick out people who have wanted to have parties in his yard. He has to clean up his yard almost every night.

âA lot of people like to clean out their car like theyâre at Wal-Mart or something,â he says. âActually, we provide a service for the state fairgrounds. If it wasnât for us, thereâs no way they could handle the flow of cars that comes in.â

Cooper has called taxis for those who have drank too much. His wife, Sharon, has driven elderly people who have come back confused and lost from the heat to find their vehicles.

âIâve kept vehicles overnight and called Ubers and taxis to get people home when they come back,â Swieter says. âThey pay me a little extra to keep it overnight, and they come back in the morning when itâs safe for them to drive.â

Cooper says the best yards for parking have easy access in and out, and that the cars need to be well spaced out.

âYou donât want door-dings and stuff like that coming back on you,â he says, adding that he once had a man who had a banged-up car come in and later try to claim someone who parked next to him damaged his vehicle.

Thatâs why Cooper tries to park vehicles himself. He also stays up until the last car is gone.

Through the years, heâs established repeat customers. Many will call ahead and ask him to save them a spot and then tip him extra for holding them a parking spot. He parks many vehicles for elderly and handicapped people. 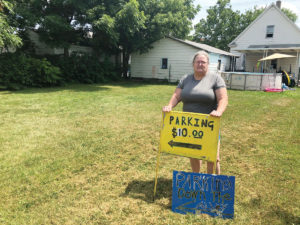 Veronica Goltz parks cars in her backyard to make extra money during the Iowa State Fair. Photo by Melissa Walker.

Cooper and his wife are both retired and use the money they make â he charges $6 a car â as part of their livelihood and to pay for bills.

Veronica Goltz, who lives a few blocks from the fair gates, makes up to $200 a day parking cars in her backyard. She uses the money as part of her income and to pay for extras.

She can park 12 cars diagonally. The first weekend, the yard fills up within an hour. Throughout the rest of the fair, it depends on what act is performing in the Grandstand.

A decade ago, Goltz charged $5 for a vehicle to park. Now, she charges $10 along with most others in the neighborhood.

Some residents near the fairgrounds have parties and potlucks during fair season. Swieter says theyâre together more than they would be with their coworkers at a full-time job.

âWe get to spend 10 days with the people in the neighborhood,â he says.

Swieter fires up his smoker and cooks meat, while other neighbors make side dishes for a potluck the first Saturday of the fair. During the day, Swieter sets up a television and watches Fox Sports in between parking cars.

Depending upon the night of the fair and the Grandstand act, some residents will change their parking price. 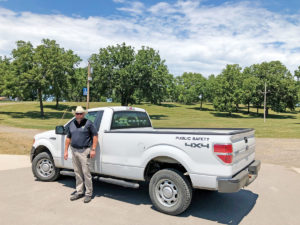 Kenny Hargis, parking supervisor for the Iowa State Patrol, stands in front of the University Avenue parking lot, where 1,500
vehicles can park.

Swieter, who declined to say how much he charges, keeps his rate the same regardless of when someone shows up to park for the day. He will park between 250 and 350 cars in a season. Heâs self employed and does landscaping and construction, so he takes off that time from his regular job to park cars during the fair. After his salary is paid
for the week to cover bills, his family uses the extra money to pay the tuition for their children to go to Grand View Christian School. Before their sons were in school, they used the money to take a long family vacation.

Judith Sanders has lived on Capitol for 40 years. She and her husband donât allow parking in their yard, partially because of their chain link fence, even though all of their neighbors do. She says it creates issues in the neighborhood with neighbors intentionally parking all of their cars and their friends along the street. One neighbor calls the police if someone parks too close to a stop sign or makes another parking violation.

While parking is not typically allowed in yards, per city law, the City of Des Moines does allow temporary parking in residential yards for State Fair overflow parking, the Drake Relays and other events the City Council officially designates as allowable.

âI wish they had more parking over there because it congests it,â Sanders says. âItâs a free-for-all.â

Residents who receive payment for parking vehicles in their yard are required, by law, to have a sales tax permit and pay sales and income taxes.

The Iowa Department of Revenue issues sales tax permits. The department was unable to provide the number of
permits issued for those who park at the State Fair because types of sales taxes are not tracked separately, says John Fuller, a spokesman for the department.

Every year, the department receives calls from residents about people who allegedly donât have a sales tax permit to
park vehicles.

âWe do, however, follow up on those we hear about that may not be complying with what the law requires, and this generally leads to increased compliance,â he says. âOur goal is to try to get people to comply with the law, but weâre realistic in knowing that everyone doesnât.â ♦