Time for The Slaughterhouse

A conversation with a co-founder of one of Des Moinesâ most famous haunted attractions and two of his key collaborators. 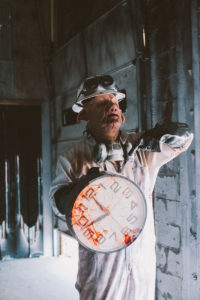 Ian Miller and his brother started Big Alâs Slaughterhouse a decade ago. In the beginning, the duoâs DIY haunted popup attraction operated on the cityâs Southside â behind the American Family Thrift Store on Southwest Ninth Street in the space currently occupied by a car lot. During its early years, the spook house frequently changed locations, choosing to haunt different parts of the city while growing the number of people involved with the operation. At some point the decision was made to drop âBig Alâ from the name, and in 2017 The Slaughterhouse moved into its semi-permanent home at 97 Indiana Ave., behind the old Colonial Bread building. In 2018, The Slaughterhouse partnered with the band Slipknot, and the joint branding endeavor turned out to be a stroke of genius, making The Slaughterhouse famous, spiking its popularity, and making its name internationally known.

This will be The Slaughterhouseâs last Halloween at 97 Indiana Ave. Following the scary season, it will migrate to occupy the basement at 500 Locust St. â within the former Bank of America building. The organization currently employs nearly 70 people, including managers, makeup artists and stage actors. 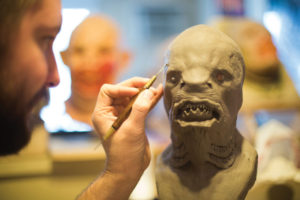 Collier Wilmes is a mask and prop sculptor who made his own toys as a child. Photo by Kristian Day

Dark ride and haunted attractions are part of a billion-dollar industry. That isnât chump change, and while waiting in what sometimes seems like mile-long lines, incoming customers often drool while calculating the gate. But this small businessâ earning potential is limited by the short span of time it has to cash in. With this in mind, The Slaughterhouse is planning to soon take its business model to another level.

âWhen we moved into this space in 2016, we had just an open room,â Miller says. âWe worked with a number of sculptors, builders, electricians and other artists to assemble that first layout â not to mention the fire department and safety inspectors to make sure this place was compliant with every regulation. When the lights are on, you can look up and see every safety light, every CCTV camera, handicap alt routes, etc.â

Walking through the Slaughterhouse maze with the lights would seem like it would take away its mystique and unveil every âman behind the curtain,â but the details still shine with every distressed set piece, every hand-sculpted mutant or animal. The âMate Feed Keep Repeatâ room â named after Slipknotâs original self-released/DIY album â can appear more frightening with the lights on, as it no longer requires guessing what body part is hanging from a hook or what is clogging the meat grinder. 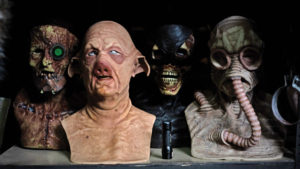 The Slaughterhouse owner Ian Miller says he grew up watching horror films but was even more influenced by Jim Hensonâs (âThe Muppetsâ) creature and puppet designs. Photo by Kristian Day

Miller says finding a location for a haunted house type of business can be tough if you donât know the right questions to ask.

âYou think about the old church-basement haunted houses that we grew up with and how they would get us excited about having our own someday. So, folks do it on their own in old barns, garages or sketchy, abandoned buildings. People look at a natural destressed building and think this would be perfect for a haunted house. Sure, it looks creepy and gross, but you donât want real black mold on your walls or ceiling.â

Miller says safety must be the top consideration.

âWhen I check out a haunt somewhere, the thing that scares me, more than any type of gag, is finding a loose floorboard or something that is really dangerous.â

According to Miller, many hours can go into making a venue like The Slaughterhouse look and feel the way it does. Cutting corners because someone found a âready-madeâ location isnât safe for the operator or the customers.

âAll it takes is for someone to trip and hurt themselves in the middle of a working attraction,â he says. 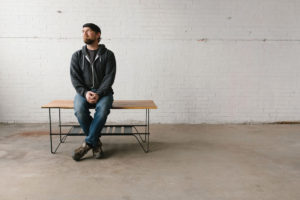 Justin Strait owns a company that makes custom furniture and has âeverything to do with the mechanicsâ at The Slaughterhouse, according to Ian Miller. Photo by Caitlin Cisar

Miller grew up reading Fangoria magazine and watching horror films, but says he was even more influenced by Jim Hensonâs (âThe Muppetsâ) creature and puppet designs that would later inspire his own sculpting. He quickly developed a makeup kit of his own from over-the-counter materials. He rented lots of VHS tapes and hit the pause button to learn how gags were pulled off. He read the books of make-up legends Dick Smith and Tom Savini.

âThose how-to books were great, but they were always missing an important step that I am sure was completely on purpose, so you had to figure it out yourself,â Miller says.

âI am always working with everyone on staff. I run through this place over and over every day of the week. We have this environment, and we need to have this effect,â he says. âPeople come here for an experience. I am used to always having to pare things down due to whatever reason it may be, but we have to maintain or even enhance the experience.â

When new staff members are brought on, they receive a 70-plus-page manual on how The Slaughterhouse is run. They undergo training exercises including fire and tornado drills, and they quickly become aware of every safety measure that needs to be taken to maintain a great experience.\

Miller has brought several key players into his Slaughterhouse family, including Justin Strait of Strait Built Designs and Collier Wilmes, a mask and prop sculptor who is originally from Mount Ayr. 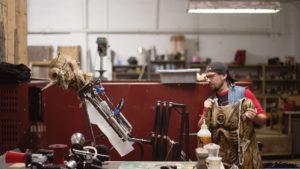 Justin Strait uses his engineering background to create intricate projects and displays at The Slaughterhouse. He says he makes everything with âoff-the-shelf parts.â Photo by Kristian Day.

Strait has an engineering background and designs custom furniture made to order. His work is both contemporary and can also include reclaimed objects. He started making furniture at West End Architectural Salvage and eventually started his own company. Although Strait had nothing to do with any set dressing, he had everything to do with the mechanics. This includes how the doors work and the barrel roller that was customized to interact with the audience, and most everything else that moves around the haunt.

Strait became involved before the walls of the Slaughterhouse even went up.

âThey had a perfect pallet to start with. I came in at the very beginning (of 97 Indiana Ave.) and worked on the vortex tunnel, the steel beam for the aerial actor, and the pushcart ride. The second year, we did the platform that could hold 15 people (3,000 pounds). I had to fabricate everything for these specific projects. The goal was to make complex motions with simple mechanics. I was able to make everything work with off-the-shelf parts, but I am always trying to make things better and bigger.â

Since starting his own business, Strait has also been involved in designing sets for commercial use for clients including Pella Windows and Doors.

Wilmes moved to Des Moines in the summer of 2017. He wanted to move to a bigger city and find a market for his craft of sculpting and designing masks. Des Moines isnât New York or Los Angeles, but he did find a home for his creations at The Slaughterhouse.

âGrowing up in Mount Ayr, you can imagine that there isnât a whole lot to do to cultivate creativity except for driving around on the backroads or watching movies,â Wilmes says. âI was never a sports guy, so watching movies on SyFy Channel or getting DVDs from Netflix was my exposure to all these ideas.â

Wilmes says he made his own toys.

âI would make toys starting with wires and clay, not too different than the way Ray Harryhausen would make King Kong and the dinosaurs come to life. That eventually shifted into me making my own monster masks like Bigfoot, swamp creatures and other deformed weirdos,â he says.

Miller found Wilmes on social media where he would be posting photos of his creature designs. He invited him into the fold where he was able to put his skills to work. One of his creations includes the multi-eyed snake that emerges from one of the shadowy corners of The Slaughterhouse.

A HAUNT AFTER HALLOWEEN 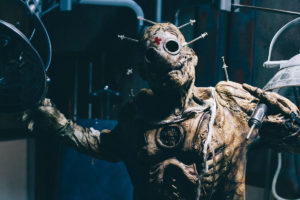 The Slaughterhouse will have its last year at 97 Indiana Ave., as it will relocate to occupy the basement at 500 Locust St., the former Bank of America building. Photo by Karla Conrad

After Halloween passes, most haunts shutter their doors and start thinking about next year. They discuss what worked, what didnât and ideas for sets they can build out for the next season. Miller says he has plans to extend The
Slaughterhouse for events outside of the regular Halloween season.

âWe donât have plans to go year-round â¦ but we do have plans for isolated events including a Krampus event around Christmas time and maybe something for the other holidays down the road,â he says.

The partnership with Slipknot has also opened doors that will expand The Slaughterhouse universe to outside of Des Moines.

âThey welcomed us into their family, and we opened them up to ours,â Miller says. âThis universe we created now can live on in different mediums and locations.â

Miller says anyone who develops or runs haunt attractions will be the first to tell you that they did not get into it for the money.

âMy brother and I always had a dream of having the premiere haunted attraction for downtown Des Moines. When you are kid, that seems likesomething that is so out of reach. We started with our first pop-up in 2009, and after a couple of goes at it, you realize that you really are not far off. Now here we are.â

The new space will allow The Slaughterhouse to develop both as an attraction and as a business partner with the community, Miller says.

âNow we are moving to a space that will put us in the heart of downtown and will be sharing the neighborhood with the likes of Full Court Press and all of their endeavors. We will also be accessible through the skywalk, which is
something we would like to see more utilized. We want to be a good neighbor and be part of the urban development that is happening in Des Moines.â ♦