Get your popcorn ready! CITYVIEW takes a look at the drive-in movie theaters of central Iowa â then and now. 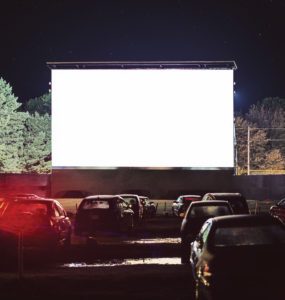 I moved to Des Moines in 2007. I was 21 and going through an addiction to the old grindhouse films of the 1970s and 1980s. The Tarantino/Rodriguez âGrindhouseâ double feature had just been in theaters, and I decided that I needed to watch all these exploitation-style films, such as biker movies, women in prison films, and Mondo shockumentaries â âMondo Cane,â âAfrica Blood and Guts,â etc. The one thing these movies had in common was that their main market was American drive-in movie theaters. I remember going to the drive-in as a kid, but it was only to see something like the lame âJurassic Parkâ sequel paired with a rom-com for the parents after the kids fell asleep with soda stains on their jeans.

Up until the 1950s, there were only a few drive-in theaters scattered across the United States. But, in the late 1950s and early 1960s, nearly 4,000 drive-ins opened across the country. Families could see two or sometimes three movies for one low ticket price, and they could enjoy it all under the stars. Iowa was a prime location with all its low-lit rural towns and farmland. The intermission music could be heard a mile down the road with jingles such as âLetâs all go out to the lobby and get ourselves a treat!â

The popularity of drive-ins didnât last, and after this past yearâs winter vortex, few people wonder why. Our world prefers businesses that make money all year around, preferably 24/7. The profitability window for drive-ins was limited to the warmer summer months, and they were only open at night. Some locations offered heaters, but these relics had to be attached in the same manner as the even more cumbersome drive-in speakers. That meant car windows had to be kept open in order for the heaters to heat your car. Americans â many of whom went soft after the popularization of modern shopping malls â had little appetite for âtoughing it outâ to see a movie at a drive-in. The theaters eventually started to fold, and most of them have now been demolished.

When I learned that there was still a drive-in near Des Moines, I knew I needed to go as soon as possible. The Valle Drive-In in Newton is one of four remaining drive-ins in the entire state â the others are the Blue Grass Drive-in in Blue Grass, 61 Drive-in in Delmar, and Superior 71 in Spirit Lake. The Grandview Drive-In in Grandview went out of business in 2016. It couldnât make the switch to digital projection, and, unfortunately, that is the standard.

I was a single guy with a lame apartment on the southside, so I didnât have a lot going for me. But the idea of asking a girl out to the drive-in felt like a stud move, and that boosted my confidence level. I envisioned the entire evening. I would be in either a classic car or a rustic pick-up truck â I had neither â and we would back in and get really close to the theaterâs speakers. A horror movie would first set the mood, followed by a romantic comedy that I didnât care about, and you can probably guess as to my vision for the rest of this evening. But none of that came close to happening. Instead, my buddy Kevin from Colorado came to visit, and we sat in the front seats of my 2000 Honda Accord drinking Pabst Blue Ribbon and eating Tombstone pizza while watching âThe Simpsonâs Movie.â It was not exactly romantic, but, hey, it was 2007 and most drive-ins made their bank switching to PG content. Please make note that the Valle Drive-In does not sell Pabst Blue Ribbon or any other kind of alcohol. I didnât ask if I could BYOB, but I saw other people doing the same. I figure it was a âdonât ask, donât tellâ kind of policy. 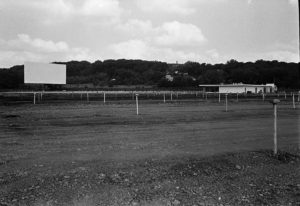 A disclaimer: There were certainly more drive-in theaters than I included in this feature, but this gives a taste of the time.

In 2011, I met filmmaker Mark Heggen who had just relocated back to Des Moines from Los Angeles. He was working on his documentary, âLost Cinemas of Greater Des Moines.â I told him about my obsession with the drive-ins, and he went on to educate me about Des Moinesâ movie theater history. Complimenting downtownâs cinema palaces were the drive-in theaters that were mostly located in what used to be the cityâs outskirts. As Des Moines and the suburbs continued to grow, what was once the end of town was no longer the end of town. These former low-light areas, that had been ideal for drive-in theaters, became just as bright as downtown. It was this growth that helped topple many of the cityâs drive-ins. 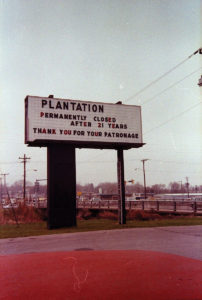 Once upon a time, the Plantation drive-in movie theater in West Des Moines had the largest movie screen in the Midwest, measuring 50 feet tall by 120 feet wide. The Plantation closed in 1986. (Photos courtesy of Mark Heggen)

Down by what is now Sands Volleyball Club, near the intersection of 63rd Street and Grand Avenue in West Des Moines, was once the home of the 950-car Plantation Drive-In. It opened on July 2, 1965, and at one time had the largest movie screen in the Midwest, measuring 50 feet tall by 120 feet wide. It was owned and operated by Richard Davis, Clay Musk (both were also owners of the Pioneer Drive-In) and Bob Fridley. The theater was equipped with 402 of the aforementioned heaters that were similar to the speakers that would attach to windows. However, the theater was built in a flood plain, which had not been a problem in years. So the fear was ignored until it finally happened and continued to happen. The Plantation finally closed in 1986.

âI remember going to see âThe Poseidon Adventureâ in the early 1970s with my parents at the Plantation, and it was pouring rain,â shared Heggen. âThe movie is about a giant passenger ship that gets hit with a tidal wave. The rain was so heavy that the movie became so disorienting, but it was also a really interesting effect.â 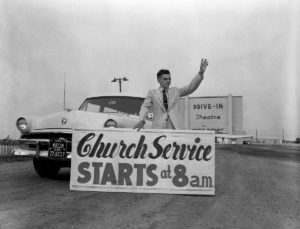 The land under the Menards on Southeast 14th Street in Des Moines was once home to the Southeast 14th Street Drive-In. The theater could hold 600 cars and attempted to monetize its off hours by hosting church services, swap meets and flea markets. It closed in 1995. Its final triple feature was âDangerous Minds,â âJudge Dreddâ and âSpecies.â (Photos courtesy of Mark Heggen)

On the large lot of what is now the Menards on S.E .14th Street and Army Post Road once sat the Southeast 14th Street Drive-In, which had a long life from when it opened on May 14, 1948, with the Marx Brothers classic âA Night in Casablanca.â The theater could hold 600 cars and was operated by Central States Theaters, a chain that ran many movie houses in Iowa including the Algona Drive-In, Campus III in Iowa City, and the Fairfield Drive-In. Central State Theaters tried to be innovative and find ways to make money at the drive-ins during the âoff hours.â This meant during the day. So they attempted to have church services at the drive-in theaters on Sunday, as well as swap meets and flea markets on Saturdays, as many others did. But the church service was unique. Much like going to the movies, attendees pulled up cars but were dressed in their Sunday best and could walk up to the concession stands to order coffee while church was in service.

The Southeast 14th Drive-In lasted a long time, but it finally closed on Oct. 15, 1995. Its final triple feature was âDangerous Minds,â âJudge Dreddâ and âSpecies.â What a way to go out. 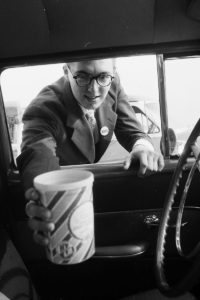 Much has changed in the film industry since the popularity of drive-in movie theaters. The gravel parking lots, open windows and old-school audio equipment that were once acceptable have struggled to compete with ice-cold air conditioning, impeccable cuisine concession offerings, high tech sound, and/or Netflix. (Photos courtesy of Mark Heggen)

The Capitol Drive-In at 4646 N.E. 14th St. in Des Moines opened in 1952. The lot could hold 728 cars and included a playground for kids and concession stands with seated patios. It is rumored that travellers on I-80 could see the gigantic neon sign with Cappy the Clown, the drive-inâs mascot, and it was often mistaken to be a casino. It finally closed and was demolished in the early 1980s. (Photos courtesy of Mark Heggen)

One can properly guess where the edge of town once was by figuring out where the drive-ins once were. East 14th had a number of them. The Capitol Drive-In opened on Sept. 19, 1952, with the Kirk Douglas classic âThe Big Treesâ and âGallant Bessâ with Cameron Mitchell. The lot could hold 728 cars and included a playground for kids and concession stands with seated patios. It was designed by Lloyd Hirstine back when movie theaters and drive-ins had mid-century style architects creating their structures. (Note: Bob Fridley has been putting water falls in his movie theaters since the 1950s and still does to this day). It is rumored that folks traveling on Interstate 80 would see the gigantic neon sign with Cappy the Clown, the drive-inâs mascot. People thought it was a casino and not a drive-in. However, what was state-of-the-art at one time doesnât remain. It finally closed and was demolished in the early 1980s. 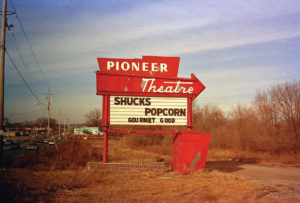 In case you have ever wondered about the poor placement of that billboard sitting in back of the RV park on Southeast 14th Street, it turns out that it is not a billboard. It is an old drive-in movie screen for the now defunct the Pioneer Drive-In. (Photos courtesy of Mark Heggen)

Many locals have likely seen the large RV park on Southeast 14th Street with a white billboard sitting far back on the lot. I always thought that was a poorly placed billboard, but it turns out that it is not a billboard. It is an old drive-in movie screen for the now defunct The Pioneer Drive-In. The Pioneer was owned and operated by Richard Davis and Clay Musk. Conflicting records show that it was owned and operated by the Dubinsky Bothers from Kansas City (which may be true at a different time period). It opened on Aug. 19, 1959, with a maximum capacity of 700 cars.

Nostalgia can be a tricky disease where we fall into the ugly trend of âthrowbacksâ and remakes. Itâs easy to think life must have been better when places like these existed, but the era of the drive-in is done. But that is all the more reason to support the few that remain.

The Valle Drive-In made the switch to digital a few years ago, which was a hearty $80,000 investment and included a new projector, new screen and new sound. It is well worth the 30-minute drive from Des Moines to enjoy this incredible movie-watching experience.

âWe had the opportunity to take over the responsibility of the oldest drive-in in Iowa a few years ago and couldnât pass on such a great piece of Iowa history and American culture, â said Jeff Namminga, co-owner of the Valle Drive-in in Newton.

The drive-in is 70 years old, and the previous owners had operated it for 40 years, according to Namminga.

âA step back in time, a slower pace, less technology, and time with friends and family. This is what we get to witness nightly as the sun sets over the corn fields of Iowa.â ♦