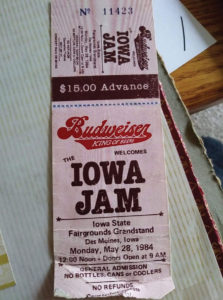 Many of you YouTube junkies have likely stumbled across a shot of the 1980s video documentary âHeavy Metal Parking Lot,â where a bunch of teens are tailgating outside of a Judas Priest concert in Landover, Maryland, in 1986. If you havenât seen it, stop reading this and get on your phone, laptop or smart TV, do a search for it, and take 17 minutes to enrich your life. That will prepare you for the trip in time I am about to take you back to at the Iowa State Fairgrounds in May of 1986 for the legendary Iowa Jam.

The Iowa Jam started back in 1974 as a Memorial Day weekend concert conceived by Steve White, Jim Henneberry and John Hoak after much success in booking shows in the Midwest. Huge acts came through including ZZ Top, Toto, Winger, Poison and others. Steve White skipped college to open up a record store called Music Circuit in Des Moinesâ Drake Neighborhood at 3213 Forest Ave. It was down the block from Jollyâs (old school rock club). Several months after opening his record store, he started promoting shows through his company, Music City Productions, with big acts such as Savoy Brown, Rory Gallagher, Eagles and Fleetwood Mac. They even had their own ticketing service called the Music City Ticketing Network, years prior to Ticketmaster.

White and his partners made headlines that first year after rain forced the first Iowa Jam to cancel in 1974 and some fans became irate. The incident made the front page of The Des Moines Register, and the boys came up with what is now the industry standard for portable roof structures. The first successful Iowa Jam was in 1975 with a lineup consisting of Bonnie Koloc, Dan Fogelberg and The Ozark Mountain Daredevils. Yes, these are a far cry from what eventually became a large scale metal festival of the 1980s. It was a slow crawl, as the Iowa Jam of 1980 saw a bill of Journey, Molly Hatchet, Off Broadway, The Babys and Toto. But by 1982, Iron Maiden, Rainbow and Loverboy were turning Des Moines.

David Hicks from Marshalltown was 15 years old when his brother Mitch took him to the Iowa Jam of 1986. Aerosmith, Metallica, Ted Nugent, Dokken and Armored Saint were all on the bill.

âI was more into Dokken, but Armored Saint kicked off the show, and I thought they were phenomenal. Right after that, I joined their fan club,â he said.

Metallica was just taking off at the time.

âThey had just headlined a show in Davenport the night before at The Col Ballroom, and they were touring with Armored Saint for the Master of Puppets tour.â

Hicks went on to attend each Iowa Jam through 1989.

âI wanted to go in 1984 but was still a little young. That was when MÃ¶tley CrÃ¼e debuted in Iowa, when they were on tour with Ozzy. Night Ranger and a few other bands were there, too.â

Rob Strabley drove in with a car full of friends from Jefferson.

âIt was hot and humid. They would let you take in alcohol, but it had to be in a plastic jug. People would be walking around with milk jugs full of Everclear and orange juice,â he said. âThe show opened with Armored Saint; they were in that same vein as Metallica. They werenât on the bill, so no one really knew they were going to be there. Dokken was on tour for their âUnder Lock and Keyâ album. I was really into the music and had aspirations of someday becoming a drummer in a metal band.â

Andy Hall of Lazer 103.3 interviewed guitarist Kirk Hammet of Metallica in 2017, and he talked about his memories of the 1986 Iowa Jam.
âI am thinking about Iowa, and I remember playing the Iowa Jam in 1986â¦ It was during the break of the Ozzy tour that year. It was super cool, and it was the first time we played with a band like Aerosmith. It was a great hang back then.â

Could the Iowa Jam happen today? Well, it would need major financial support, and frankly, that just doesnât exist. We have so many festivals in Iowa now, with the majority of them in Des Moines. They all look to the same major companies for money. Many of you may love the idea of a metal festival versus a bunch of winey boys with mustaches and banjos, but it wonât be happening anytime soon. After you finish reading this, get back in the YouTube black hole and do a search for the Iowa Jam. Several bootleg recordings are out there from the various shows. If you dig deep enough, you may even find the entire recording of the 1986 show.

A big thank you to Andy Hall of Lazer 103.3 for bringing everyone together on this. Check out his interview with Kirk Hammet where they discuss the 1986 Iowa Jam. Itâs worth the listen. https://lazer1033.com/andy-hall/andys-interview-with-kirk-hammett/ ♦