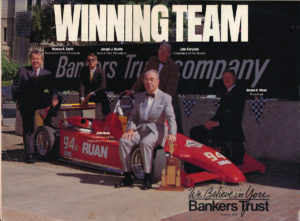 July is âAmericaâs Party Monthâ to me, and a few weeks back we accepted the decision that the Iowa State Fair was going to be postponed due to that thing most all of us have been talking about since March. In fact, much of our customary summer fun has been postponed, including the Des Moines Arts Festival, 80/35 and Hinterland. We try to make the most out of disappointing situations because we are Iowans. Dust bowls, the farm crisis, floods and now a pandemic. Is that all you got?

Truth be told, many events have come and gone in Des Moines â and not due to any pandemic. This story is one I have been saving since the fall of 2019 when I first learned that the guy who works on my Dodge Sprinter cargo van is a racing legend.

The Ruan Greater Des Moines Grand Prix launched in 1989 with three days of racing through downtown Des Moines. It actually began in 1986, when a letter was received by the mayor of Des Moines, Pete Crivaro, who suggested that a road race be held in the city streets as a way to bring attention to the city, something that had already happened in cities like Columbus, Austin and, of course, Indianapolis. The letter was passed on to the Greater Des Moines Convention and Visitors Bureau to see if a road race was worth pursuing. Along with that came interest from the Ruan Corporation, which would become the major sponsor of the event.

I donât know anything about racing. I canât even fake it. So, to learn that so many different racing organizations even exist is fascinating to me. A team from Des Moines started investigating what type of high-speed racing event could run through our cityâs streets. A âFormula 1â event was first discussed that would feature exotic open wheel race cars similar to events in Brazil or Great Britain (and much like the Greenwood Raceway events in Indianola). But the costs to do a large event such as that in Des Moines seemed insurmountable. The team then investigated NASCAR, IMSA, USAC and finally settled on the SCCA, the Sports Car Club of America. Lots of familiar names were part of the team: Bob Houser was the board president, Frank Cownie was the board secretary, and Lyle Kreps began as a worker relations captain and eventually became the executive director.

Kreps had been racing sports cars for nearly 20 years prior to managing the Grand Prix from 1990 to 1992.

âAt that time, we were considered one of best street races at the time,â said Kreps. âIt generated a lot of money for hotels and restaurants. Lots of sponsors came on board to get their name on it. We were rated second- or third-best grand prix in the country.â

Chuck Hemmingson remembers when he first heard about the Des Moines Grand Prix.

âAll of a sudden, I started seeing things on the news about it, and I knew that I had a vehicle that could race in it,â he said. âI was 31 at the time.â

Hemmingson drove a Nissan pick-up at the time that was a series four with a small four cylinder. He had already been racing with it for more than a year.

âI really knew the streets of Des Moines,â he said. âI adjusted my suspension to match those streets and the turns I was going to face. We would have bottomed out if we hadnât done that.â 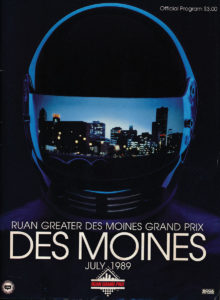 Cover of the 1989 program book

Hemmingson had been racing since the 1970s and had traveled all over the country and Canada. He would go on to become a racing legend in Iowa, earning accolades such as the 1990 SCCA Des Moines Region Pro Driver of the Year. Oher recognizable names were also racing cars down Grand Avenue: Noah Lacona (founder of Noahâs Ark on Ingersoll) and Scott Powell (whose family started American Republic Insurance Company). Powell was named the 1990 SCCA Des Moines Region Pro Rookie of the Year.

An estimated 30,000 people showed up each day for the Ruan Grand Prix. The hope was to break even financially, which organizers say they came close to doing. The event lasted from 1989 until 1994. An event of this size is expensive and requires a great deal of cooperation from the city, local businesses and, of course, citizens. Financial struggles were building, and some local businesses didnât like having the streets closed. The flood of 1993 didnât help, and 1994 became the final year of the race.

âIâve crossed a lot of finish lines and many times in first place, but there was nothing like crossing the finish line of the Des Moines Grand Prix and seeing my family in the grandstand,â he said.

And there has been nothing like the Des Moines Grand Prix since. But could it happen again? Kreps doesnât think so.

âThe standards for racing now are a lot higher than they were back then,â he said. âFor one, no one races on city streets anymore. So, unfortunately, I think it would have faded.â ♦