Michael Miller and the search for the perfect record store 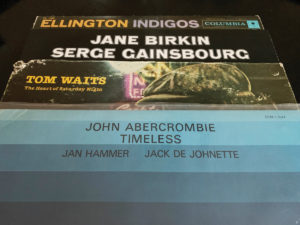 I donât typically hang out with my couch surfers, mainly because I am busy with my own life, and my guests are just trying to pass through on their way to their real destination. But Michael Miller of Kansas City was traveling to a number of cities with one single mission: to visit 10 new record stores in 10 different cities. Now, those who have been reading my columns in CITYVIEW for the last two years understand that I am a minimalist, and I donât purchase a lot of items unless it either sparks joy or will be used regularly. But everything I preach and believe in stops when it comes to buying records.

When did your obsessive and compulsive collecting of records kick in?

âWell I used to be a big CD collector like 10 years ago. Mainly metal and punk CDs because labels and distributors would come and go almost overnight. Everything was a collectorâs item. A lot of the metal albums I got were from Switzerland, Germany and Norway. Most were not easy to get in the United States. The Internet was not what it is today. You had mail order sites and eBay. You wouldnât be able to find the newest Blut Aus Nord (French for Blood From North) CD on Amazon. So I would go to record stores all over the country cruising for hard-to-find tunes. Some of my favorite places included Evil Clown Records in Chicago, Black & Read in Denver, Ear Wax in Madison, and Criminal Records in Atlanta. I would go on vacation based on how many record stores the town had.

âNow, the Internet has caught up. CDs actually have very little value now. If I want pristine digital sound, I download the album off bandcamp.com or iTunes. It takes a up less room. I went through a hard financial period a few years ago and sold all my CDs. The fun really wasnât owning the music, it was the hunt. So I have been re-collecting a lot of the music I had on CD but on vinyl. My taste in music expanded as well, so I am not just searching for metal or punk records; I am also looking for old jazz records like Duke Ellington. There is so much stuff still in the wild (in stores, garage sales, etc.).â

Why do you think itâs necessary to visit every record store in every city?

âIt speaks a lot about a community. If itâs a record store that just sells new releases, I usually wonât go. I donât care about that. I want record stores that are packed with used collections and have all been carefully organized. For example, Peopleâs Records in Detroit is amazing for this. They are packed with old and new releases, and they are labeled in such a way that if I am not 100 percent sure what something is, they will have a list of artist/bands that have a similar sound. But what it says is that there is some great culture to be seen and heard in a town that has great record stores.â

Well, we went to a couple of record stores: Vinyl Cup and ZZZ (FYI I love every one of our record stores, but we only had so much time in the day). What did you buy?

âDuke Ellington, âIndigos.â This record rules and needs to be heard on vinyl not CD. The song, âSolitude,â I can listen to over and over. USED.

Serge Gainsbourg/Jane Birkin, âCompilation.â Based on your recommendation that I need to listen to Serge Gainsbourg. I jammed some tunes on Spotify before making the purchase. I am excited to learn more about French pop from the 1960s. NEW.

John Abercrombie, âTimeless.â Also your recommendation. The cover had me sold, but 12-minute title track is worth the purchase alone. Smooth jazz from the future as imagined in 1975. USED.

Tom Waits, âThe Heart of Saturday Night.â I had been looking for this one for a number of years. I know itâs easy to get on the Internet, but there is absolutely no fun in that. Tom Waits in his younger years just screams New York City in the 1970s and 1980s for me. Dirty streets, smoke-filled bars, and late-night pizza houses. USED.

Where do you go from here?

âWell, my original plan was to head north to Madison to Ear Wax Records, however I have just learned that it has finally closed its doors. Itâs a shame because I could buy five 7-inch records at $2 a piece. Sometimes even cheaper if I paid cash. It was a punk collectorâs dream. But my plan is to head east to the Quad Cities to Ragged Records. Iâm skipping Iowa Cityâs Record Collector this trip, as I have been there many times prior. Then up to Milwaukee with a possible stop in Chicago. ♦