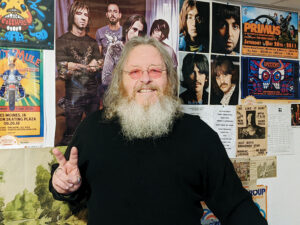 Polk City man, James Taylor, 69, has written two books about his life and his many concert-going experiences.

5-plus decades of concert-going results in two books for James Taylor.

âWhatâs it like in Iowa?â This stranger wanted to know.

A young local named James Taylor answered as best as he could and then asked his vaguely familiar bar mate what he did for work.

âIâm the lead singer for the Beach Boys,â he said. âIâm Mike Love.â

Taylor will be 70 in March. The retired truck driver lives in Polk City and is a self-described life-long hippie.

âCanât retire from that,â he laughs.

Old habits, it seems, die hard. Especially the fun ones. He has a million or more stories he likes to spin, most of them revolving around music.

As a kid, Taylor bought not just the records he enjoyed listening to, but he also purchased the ones with the best-looking album covers and the albums with neat-sounding names â The Presidents of the United States of America, the Dead Kennedys, The Dead Milkmen â even if he hadnât heard of the musician. This strategy paid off. Today, his collection is so impressive he needs to carry an extra insurance policy to protect it.

The collection fills much of Taylorâs down time â and his basement â but live music fills his heart.

â(Iâve seen) every artist except the complete Beatles,â he says.

That might be a slight exaggeration, but he numbers his concert experiences in the thousands. He has been doing it for five-plus decades, which makes it difficult to pin down his favorite show.

But one magical night in Kansas City, circa 1975 at Arrowhead Stadium, was a show heâll never forget.

âProbably the best show Iâve ever heard was The Rolling Stones,â he says. âThat was when they were at their musical peak.â

Ted Nugent âwas probably the loudest,â according to Taylor. Sly & The Family Stone, at the old Ames Fieldhouse, might have left him the least impressed.

âThey played Thank You (Falettinme Be Mice Elf Agin) over and over,â he remembers. âUntil after about 30 minutes, he (Sly) walked off the stage.â

The memories generated from Taylorâs lifelong love affair with music eventually spawned two self-published books. These books canât be found for sale at many places, according to Taylor, online or otherwise, but if you ask him, he might offer you one. Be ready for a trip down memory lane.

âI remember going to see the Monkees (at Vets Auditorium), and the guy who opened up was mesmerizing. His name was Jimi Hendrix.â

âIâve learned so much about bands,â he explains. âI have seen just about every act from the 1960s to now and have had the chance to meet with a few.â

âI went to three shows just this week,â he says. âI saw, I think, the best âbar bandâ (Stafford) I have ever seen last week at Woolyâs. … the place was packed. … I thought they were the best jam band Iâve heard in 55 years of concert-going.â

And thatâs what it is like living in Iowa for James Taylor. ♦