Until âcheckmateâ do we part?

Dangerous on the board, this coupleâs life mission is to âfixâ chess. 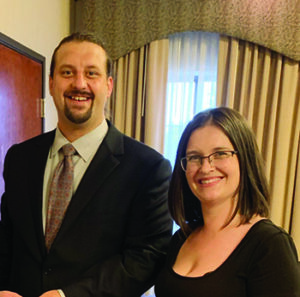 Jim and Katie Freerksen work to grow the human connection thatâs possible through chess, the game that brought them together. Photo submitted

Her ride home from school was delayed. Bored, the 15-year-old Ankeny High School student looked for a fun way to fill the time. Since she couldnât find one, Katie Gordinier stopped into Ankeny Highâs Chess Club.

âI ended up having a great time learning how to play,â she remembers.

She also met a boy.

Needless to say, the east-side kid endured an imperfect upbringing, and following his third arrest as a teenager, Jim remembers calculating the next logical outcome. Most of his 10th-grade friends had already dropped out of school. If something didnât change, and soon, all signs pointed to him following suit. Then maybe prison? After that, maybe something worse.

Retreating into the friendly confines of Ankeny High Schoolâs Chess Club, Jim began to thrive. His penchant for using logic, reason and his mental acuity all shined, regardless of his rough-and-humble beginnings. At one point, he ascended to the No. 1 ranking for scholastic players in Iowa, eventually finishing third at the state competition while also being a part of the 2005 Ankeny High School State Championship team.

But the best part of going to chess club? Thatâs where he met his future wife… Katie.

After graduation, it was off to college for Katie at Iowa State. But the high school sweethearts didnât split. Later, Jim attended Drake and helped revive the Bulldogsâ chess club. But even after his scholastic chess career ended, he still didnât have his fill of chess.

In 2016, the duo decided to start DSM Chess Company. That led to chess tutoring, coaching chess, growing the local chess community, teaching chess at several Des Moines area elementary schools, and chess, chess, chess. Plus, they had three kids of their own who they also taught to play chess.

Life was busy and hectic, but what the heck, life was good. They couldâve lived happily ever after. And then along came COVID-19 to overturn the proverbial board.

Chess competitions went mostly online during that time. After a major tournament went kaput for some unknown digital reason â the site crashed leaving thousands of entrants with an un-scratched chess itch â Jim was fed up with the antiquated state of chess.

Believe it or not, according to Jim, playing online in official chess tournaments can involve the need to access multiple sites at the same time, and there are no trusted guards against cheating. But after raising nearly a half million dollars (through private funding), that will soon change.

âMy real ambition is to fix chess,â says Jim. âBut we are positioned to make the most money off of chess, ever, in human history.â

The magnitude of the statement makes Jim laugh, but heâs serious.

The global state of chess is âblowing up,â he says, but stateside, the online technology has not progressed at a reasonable rate.

All Access Chess arrives in October (or so). This is the crowdfunding campaign and beta version of Jim and Katieâs new web platform that will offer official U.S. Chess Federation (USCF) rated chess tournaments combined with everything needed to make competition simpler for serious and novice players. Members can play in 30-plus USCF rated online tournaments every month for one flat fee, something that would have previously been unthinkable.

âAll Access Chess is building a brand new, revolutionary arena for chess gladiators of all strengths to do battle. There will be no place like it on Earth,â according to its promotional website.

âChess is logical and analytical, but it is also creative and artistic,â says Katie. âWe are sharing the beautiful thing weâre trying to create.â ♦