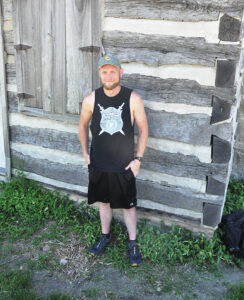 Kevin Mason, PhD, historian and assistant professor of history at Waldorf University, is retracing the steps of the 1st U.S. Dragoons, the first official group to scout Iowa in 1835 after the Black Hawk Purchase put the area under U.S. government patrol.

Road signs for Iowaâs Dragoon Trail are a common sight in central Iowa. As a boy, Kevin Mason couldnât help but wonder: âWhat the heck is a Dragoon?â Now he knows.

âThey were soldiers who were sometimes on foot and sometimes on horses,â says Mason, who grew up to be a PhD and an assistant professor of history at Waldorf University. He is retracing the steps of the Dragoon Trail that follows the path of the 1st U.S. Dragoons, the first official group to scout Iowa in 1835 after the Black Hawk Purchase put the area under U.S. government patrol. These Dragoons were sent to fact-find about plant and animal life and to document Iowaâs terrain.

âThey also wanted to better understand and have an idea of how many native people lived where, especially along these rivers,â he states while pointing to the confluence of the Des Moines and Raccoon rivers in what is now downtown Des Moines, near Principal Park.

Mason hopes to compile a comparative environmental history of the state during the past 186 years, and to learn… something.

âI had just come off a massive project and finished my PhD… but I was really just in a place where I went like, âWell, I donât know when Iâm going to be able to actually go do real research in the archives (closed at the time due to the pandemic),â which is primarily what people do professionally.â

Thatâs when Mason decided to get creative.

âIâm just doing research in a weird way,â he explains. âItâs been a weird year for everybody.â

Environmental history is Masonâs forte. Itâs the study of the natural environment â plants, animal life, water and weather â in addition to âthe built environment,â or how people interact with the natural environment and the things that humans create or have created and how those creations interact with other natural elements. Since government entities on fact-finding expeditions are known to keep meticulous and accurate records, after he finishes, he can compare his firsthand observations to the findings of the 1835 Dragoons.

Masonâs 300-plus-mile journey â he started in May and aims to finish by the end of June â roughly spans the modern Dragoon Trail, but the trail is a road made for automobiles. Since there is no actual Dragoon walking trail, Mason canât follow the exact route.

âThatâd be impossible without all sorts of trespassing,â he says.

Nor is this mission about dressing up, recreating history or competing in some kind of grueling endurance event. His mission is to observe the environment. As such, Mason takes breaks when it makes sense and only tromps 10-20 miles a day at a leisurely pace.

Whatâs on tap for Mason when he finishes?

EDITORâS NOTE: The title of Masonâs project, âNotes on Iowa,â is a tribute to Albert Lea, one of the leaders of the Dragoon expedition and the author of its official report, âNotes on the Wisconsin Territory.â For more information about Masonâs modern-day expedition, visit the projectâs website at www.notesoniowa.com. ♦