âDo what you love; love what you doâ 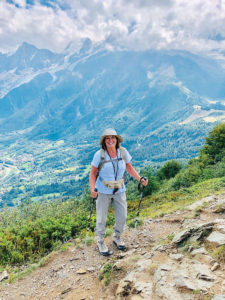 Christine Stevenson last August while hiking in France toward the Swiss border in the French Alps. The retired teacher has visited Paris at least 20 times and still has a
collection of menus from French restaurants.

The planes buzzing by mesmerized the youthful eyes of the small girl perched atop the fence post of her familyâs 1950s farm in rural southeast Iowa. During these formative years, Christine Stevenson frequently positioned herself in this spot to gaze at the horizon and imagine where the final destinations for these aircraft would be. Back then, it all seemed an impossible distance away, but later in Stevensonâs life, she discovered this whole wide world is entirely within lifeâs reach.

After graduating from college as a French major and then furthering her education in graduate school, Stevenson took a teaching job in Independence, Iowa. It was there where the French instructor was first offered the opportunity to travel abroad to Paris, and she jumped.

âMy motto, of all things, is really, âDo what you love; love what you do,â â she says.

Putting her motto into practice, Christine has now visited the âCity of Lightsâ more times than she can remember.

âI lost count,â she laughs. âBut I imagine it is more than 20. … Paris is a wonderful, wonderful city.â

Enjoying exotic locations, seeing the sights, and meeting new people and friends, she has traveled to at least 15 countries including most of Europe.

Along with those experiences, Stevenson gathered ârealia,â which is defined as real-world items from everyday life to be used, generally, as teaching aids. Things like newspapers, maps, handouts, coins and anything printed in a foreign countryâs language, anything that can be put in a studentâs hands to help learn a new and different way.

âI had boxes and boxes,â she remembers. âInstead of reading something in a textbook, they could read it for real.â

The collectionâs remnants include mostly French menus and menus from other European eateries.

Most dining establishments were glad to give the menus once they learned Stevensonâs reason for wanting them. One chef even signed a copy for her.

If Stevenson could bring one thing to the states that isnât realia but instead was a new staple for U.S. cultureâs cuisine from abroad…

âThe bread,â she says without hesitation. âFrench bread baked daily in a boulangerie. That wrapped loaf in foil that is called French bread, it is not French bread.â

Exotic cheeses would be her No. 2 choice, followed closely by European-style coffee.

Now retired, Christine has made many friends to travel with through the years, but they arenât always available at the same time as she is, nor are they prepared to stay as long as she likes.

âI like to go and live and just be there,â she says.

As such, Stevenson says she is fortunate to have found a program called Road Scholar, a nonprofit that offers âeducational adventuresâ for groups of travelers who are 50-plus. The nonprofit organization enables Stevenson to more easily continue her travels. Last summer she hiked the Alps in Italy, France and Switzerland with a Road Scholar group, and next up is island-hopping in Greece.

âDo what you love, love what you do,â she repeats. ♦

With 5,500 programs in 150 countries and financial aid for those who otherwise could not participate in its programs â especially teachers â Road Scholar states that it is the nationâs largest not-for-profit educational travel organization for adults and that one-fourth of its 100,000 yearly enrollees are current or former teachers. For more information, visit www.roadscholar.org.