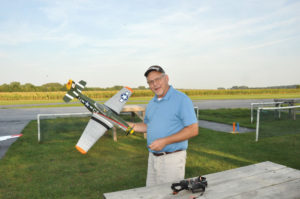 Ray Pick stands alone. Itâs early evening, and his gaze is firmly trained on something floating high above. As his eyes labor to track the object in the distance, his hands expertly manipulate the 6-inch by 6-inch black box he is holding, and his thumbs direct two miniature joysticks.

Ever so delicately, Pick is maneuvering the airborne object high up in the sky. Its wings waggle playfully before it dips to one side and falls into a series of barrel-roll maneuvers. Next, the radio-controlled model airplane finishes another lazy swoon, and Pick levels it off for an easy cruise along the clear blue Iowa skyline.

âThis is a sweet little hobby,â he says, more to himself than to anyone else. âItâs fun.â

This tranquil respite is located smack dab in the middle of nowhere â just north of Des Moines and 5 miles east of Elkhartâs I-35 exit. Technically, the airstrip might not be heaven, but for Pick and his fellow Des Moines Modelair club members, the airfield they built exclusively for flying these planes is as close as it gets.

A Modelaire is defined as any person who enjoys flying radio-controlled airplanes or helicopters. Pickâs passion is plain to see. He picked it up after an employer handed him a bonus check with one string attached: âThe money must be used to purchase something you would never otherwise splurge on.â After some pondering, he purchased his first model plane, and heâs never looked back â although, he does spend a lot of time looking up.

Approximately 50 planes currently reside in Pickâs basement-turned-aircraft-hangar. Would-be fliers can find a wide variety of built-to-scale replicas and models of just about any airplane ever flown.

âWhen do you want to get behind the sticks and fly a trainer?â he asks an interested bystander. âWe have trainers ready to go. (Joining the club gets you) three free lessons, which includes insurance.â

This isnât a high-pressure sales tactic. Pick just has a passion for his hobby and canât help sharing it. Learning to fly takes some time, according to Pick, but it isnât too tough. Club membership costs $100 annually, and that gains a person access to two mini airfields â one near Grimes and the other near Elkhart. The fees also go toward insurance in case of a crash and other perks.

The hobby can be expensive if the participant is willing, but according to Pick, it doesnât have to be. Beginners are encouraged to obtain an inexpensive and durable trainer plane that is pre-owned and built to take a beating. Doing so significantly minimizes the financial risk. Since many club members actively help train newcomers, the cost doesnât have to be a barrier to entry for most people.

The aircraft are principally made of Styrofoam with propellers and other minor pieces along with heavy-duty lithium ion batteries. Some planes have a bracket to attach aerial cameras; others are powerful enough to zoom by at 200 mph. Some pilots prefer standard laidback âfun flies,â that is when their planes comfortably cruise while the pilot enjoys outdoor relaxation. Other owners prefer competitive aerial combat and staged battles with one another.

For anyone interested, The Des Moines Modelaires are putting on a Radio Controlled Model Auction in Ankeny this month. Members enjoy the hobby by flying all year around, even in the winter. Newcomers or anyone can attend the auction and possibly take home an airplane. Pick says pre-owned-but-like-new airplanes often go for quite a bit less than their retail sticker prices.

âItâs a great hobby for grandkids and grandparents,â he adds. âYou are one with the plane. It is a fun feeling.â ♦