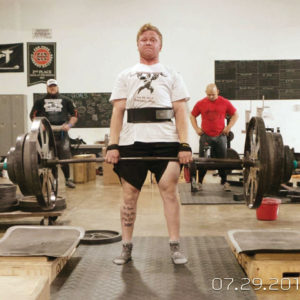 âI won the United States Strongman Association national championship for the Teen Lightweight Division,â he says. He is gearing up to defend his title in the 18-and-under 198-pound weight class later this month in New York.

Lifting Atlas stones might be his favorite exercise. Or it might be pulling automobiles with a rope. Or maybe he prefers lifting logs measuring 12-plus inches in diameter. Or is it the keg toss?

Strongman competitions feature an array of five or six different events. Steffes-Clayton doesnât have one specialty.

âThere are guys who specialize in just deadlifts or just the log press or overhead events,â he says. âBut I like all of these events. Theyâre pretty much all my favorites.â

Whatâs the heaviest thing he has lifted?

Atlas stones are giant concrete orbs made to simulate boulders. During competition, strongmen are tasked with lifting five such stones, ranging in weight up to 350 pounds or more, onto a chest-high platform.

Other battles against gravity won by Steffes-Clayton include carrying a metal frame with a beam across the top called a yoke. Each corner of the frame is stacked with weight, and the strongman lifts with his shoulders and walks with it. He once carried an 850-pound yoke a distance of 20 feet.

As a youngster, Steffes-Clayton used to watch strongman contests on TV. He daydreamed of mimicking his heroes. His goal is to realize those childhood dreams.

âIâm looking forward to competing against the guys I grew up watching,â he says.

Most competitors peak physically in their mid-20s, and Steffes-Clayton says he is still getting stronger. He has set the bar high for his future.

âIâm in college right now,â he says. âBut Iâm also really into strongman still. Iâm going to be for a while. Iâm not super far off, but Iâm not there either. I still have a lot of work to do.â

The goal for Steffes-Clayton is to work toward the Arnolds or competing professionally. Two to five years is his estimate for when that might happen. For the time being, his muscles come in handy for helping out around the house or stocking shelves at the grocery store where he works. When his friends or co-workers need a hand, they know whom to call.

âThey always have me lifting heavy stuff,â he laughs. âSometimes they just call me when they need help lifting stuff. Itâs like training.â

Steffes-Clayton is well rounded. Besides his weightlifting exploits, he also played varsity tennis and earns good grades in school.

But the strong man does have one form of Kryptonite: swimming.

âMy junior year, I decided to see if I sink or float,â he remembers. âAnd I sunk to the bottom. I donât float in water.â

On June 30 in New York, Steffes-Clayton will defend his title at the 2018 national championships.

WHAT IS AN ATLAS STONE?
An Atlas stone is a giant concrete orb manufactured to resemble a boulder. The stones range in weight from approximately 200 to 350 pounds or more. Lifting these massive burdens is regarded by many as the signature event in the sport of strongman. During competitions, each competitor is tasked with lifting five Atlas stones, interspersed along a 16- to 33-foot course, onto a chest-high platform.