Finances of county-owned hotel? None of your business. Clark Kauffman leaves Register. Tirrell accused of abuse.

Somebody does â probably a lot of somebodies â but not you, even though as a taxpayer in Des Moines and in Polk County you, in effect, own the place.

Hearing that the 330-room hotel might not be living up to expectations â hearing that from people who may or may not know what theyâre talking about â CITYVIEW filed a Freedom of Information request with the county. It asked for monthly financials since it opened in March and for average room rates and occupancy rates.

ââ¦The IEC Hotel Corporation (âIECâ) owns the Hotel. IEC is an Iowa nonprofit corporation exempted from federal income taxation pursuant to Internal Revenue Code section 501(c)(3), however we agree that IEC is an instrumentality of Polk County and, as such, generally subject to open records requests pursuant to Iowa Code Chapter 22.

âIEC has contracted with Hilton Worldwide, Inc. to have Hilton Management LLC operate and manage the Hotel. Accordingly, to the extent the âmonthly financialsâ you request constitute records; they are records of Hilton, rather than IEC or Polk County. As the Hotel actively competes with other private enterprise hotels in the metro area, such records would constitute trade secrets and be of a proprietary or confidential nature. If released, these records would give a competitive advantage to other hotels against which IEC Hotel Corporation is competing.

âFor these reasons, to the extent Polk County is in possession of records responsive to your request, it respectfully declines to produce them under the exceptions identified in section 22.7(3) and 22.7(6) of the Code of Iowa.â

Exception 22.7(3) is âtrade secrets which are recognized and protected as such by law.â

Exception 22.7 (6) is âreports to governmental agencies which, if released, would give advantage to competitors and serve no public purpose.â (emphasis added.)

In other words, itâs none of your business.

But it is your money. The county and the city â thatâs you â have spent or guaranteed around $70 million of the $105 million cost of the hotel. Hereâs how, according to figures supplied by the county:

â¢ The county bought the old Allied building and demolished it, at a cost of about $6 million. The county still owns the land under the hotel.

â¢ The county has guaranteed $7,805,000 in bonds backed by the Iowa Reinvestment Tax, which is a sales tax collected within the IRA district downtown. Those bonds pay 3.83 percent interest and mature in 2038.

â¢ And the city contributed $14.2 million in urban renewal bonds, which are backed by the cityâs assets.

Another $30 million or so of âcertificates of participationâ were sold to private investors. These are backed by a senior lien on the net operating income of the hotel. Those are not guaranteed by the county or the city, but in case of trouble those investors would get paid back before the county gets its money that is backed by a similar lien.

Presumably, all these notes and bonds and certificates will be paid off from the net income of the hotel, the IRA revenue or, in one case, the special 3 percent room tax. But before you get to net income â basically the revenue minus the expenses (including property taxes of about $1 million) â you have to take out another cost: According to a construction-loan commitment letter issued by Bankers Trust in 2015, Hilton gets to take up to 3 percent of the hotelâs gross revenue as its management fee. That comes right off the top, before money is allocated to pay off the bonds guaranteed by the county and the city. (The interest alone on all bonds is around $2.5 million a year, and some of that isnât paid until the $1.5 million in interest is paid private investors.)

One person in the hotel business told CITYVIEW that downtown hotels were operating at around a 65 percent occupancy rate in September with an average room rate of $135 to $140 a night. But whether the Hilton is at, above or below that level is a âtrade secret.â

And telling you whether the hotel is doing well enough to support the bonds backed by the city and county and thus keep the county and the city off the hook serves no public purpose.

Maybe, of course, the hotel is doing great, and thereâs nothing to worry about.

An aside: CITYVIEW also asked the county for a list of county employees and employees elsewhere â specifically including people in the city of Des Moines and at the Convention and Visitors Bureau â who see the figures. No such lists exist, the county said. â¦

Reporter Clark Kauffman has left The Des Moines Register to become a special investigator for the office of the state ombudsman.

Kauffman is one of the three or four best investigative reporters in the state â others are Ryan Foley of the Associated Press in Iowa City, Tom Cullen of the Storm Lake Times and Laura Belin of the âBleeding Heartlandâ blog â and has been a mainstay for solid journalism at the paper.

But he feels his time is up. âA year or so ago, I reached the conclusion that I was no longer a good fitâ with the Register, he says. âThe paper had moved in a direction that I wasnât entirely comfortable with, so it just made sense â for me and, much more importantly, for the newspaper â that I leave.â He added that heâs âconfident theyâll be able to quickly fill my position with someone who has all the qualities they prizeâ â a phrase that can be interpreted in many ways.

Kauffman, 58, joined the paper in 2000. He spent a stint as an editorial writer â where he excelled â but spent most of his years there as a reporter. In 2005, he was a finalist for the Pulitzer Prize in investigative reporting âfor his exposure of glaring injustice in the handling of traffic tickets by public officials.â

At the Ombudsmanâs office, he will join former colleagues Bert Dalmer and Jason Pulliam.

Meantime, the newspaper has dropped the daily Business Page from the Register. Executive Editor Carol Hunter says the move was made âto meet the ongoing challenge of matching costs with the revenue coming in.â

In other cost-cutting moves, CITYVIEW is told the newspaper is giving up its half of the fourth floor at Capital Square, consolidating its staff and the Gannett regional staff in space on the fifth floor, where it has the entire floor, and this spring it will give up its community-room on the first floor of Capital Square. None of this has been announced. â¦

Polk County District Judge Robert Hutchison has issued a temporary restraining order against one-time sports-talker and serial scammer Marty Tirrell, saying he cannot âthreaten, assault, stalk, molest, attack, harass or otherwise abuseâ Mary Jo Corley, his onetime girlfriend. The order, issued Oct. 18, came a day after Corley petitioned the court for ârelief from domestic abuse.â Corley, whose filing says she has been âin an intimate relationshipâ with Tirrell, says he has physically abused and threatened her.

According to the petition, Tirrell has three times âphysically abused me with his fist, hitting me in the chest, breast and torso.â Whatâs more, on Sept. 26 of this year Tirrell âthreatened to go to my employer, the Iowa Clinic, and claim I gave unauthorized medication samples to him.â Tirrell did this, the petition says, âin an attempt to get me fired.â

Corley, 57, also asked the court for financial support, saying she has âcredit-card debt that places a burden on my financial situation.â The implication is that the debt was run up by Tirrell, who has been sued countless times for not paying debts and for scamming friends and acquaintances and businesses. Judgments against him total several millions of dollars.

Tirrell, 58, long had sports-talk radio shows in the Des Moines market, jumping from station to station for one reason or another. Eventually, he ended up with a cable-TV show, but that was canceled a few months ago. Corleyâs petition says itâs âunknownâ where he might work now.

A hearing date on her petition has not been set. â¦

An Urbandale home sold for $3.8 million in late August, by far the highest-priced sale for a home ever in that suburb. The sale finalized a contract sale made three years ago between the Clark Colby Trust and Marilyn Colby Trust and something called MJG Holdings, LLC. The 4,000-square-foot home was built in 1970. The address, at 12804 Cardinal Lane in the Deer Creek area, includes three parcels of land totaling about 20 acres and is assessed at about $1 million. ♦ 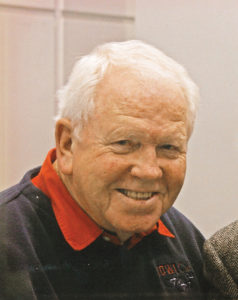 Red Hollis died the other day.

Unless you were a semi-regular at the Iowa Cubs games or at a favored Beaverdale bar or two, you probably never ran into him.

But if you had, you never would have forgotten him.

He always had a story and a smile, and he was always glad to see you, genuinely glad. He roamed the skyboxes at Principal Park, checking out who was there â heâd then make sure the owners would stop by to say hello â and making sure there was always a baseball or a Cubs hat for any special youngster in the crowd. He was, for lack of a better term, an ambassador of good will.

He was born in North Carolina in 1928, and he never lost his southern accent. By age 17 â in 1945 â he was a professional baseball player, a scrappy, sure-handed, red-headed second-baseman who would bounce around baseball for the next 10 years. He played for Atlanta and Los Angeles â and if you inferred that that meant he was a Major Leaguer, he wouldnât correct you. But that was in the 1940s and early 1950s, when Atlanta and Los Angeles were minor-league cities.

He was good. In 1951, he played in 149 games for the triple-A Los Angeles team, batting .282 and driving in 54 runs. He turned 101 double plays that year. He played with and against some of the great players of the era, and, with little prodding, heâd have a story on each. They were always good stories, though not always stories that youâd want to check out in the record books.

For like all good story-tellers, heâd embellish a bit here and a tad there to make the story a little better. But little boys and grown men would be wide-eyed, and thatâs what counts. (He embellished a bit about his height as well. That 1951 Los Angeles roster listed him at 5-feet 10-inches, a stretch that was beyond the margin of error.)
After his baseball career was over, he became a salesman and later a sales executive in the agricultural-chemicals industry. That job eventually brought him and his family to Des Moines, where he became a fan and customer â he had his company buy one of the first skyboxes at the new park in 1993 â and, quickly, a fixture at the park. Somewhere along the line, he was put on the payroll.

He clearly was the most popular person on the staff â and the only staffer ever honored by having his own bobblehead giveaway day. âWhereâs Red?â or âRed saysâ¦â or âTell Redâ¦â is how many conversations started at the park. When he was so weakened by cancer in mid-season this year that he no longer could make it to the ballpark, the place seemed a little less joyous.