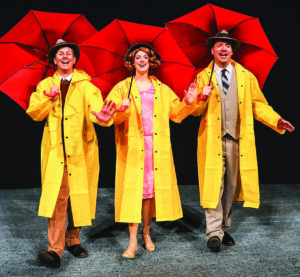 James Kolnik, Stephanie Schneider and Charlie Reese head the cast of âSinginâ in the Rain,â March 13 – April 5, at The Des Moines Playhouse. Photo by Steve Gibbons.

The forecast calls for occasional rain, sprinkled with lots of song and dance. Definitely something to sing about. This monthâs offerings include the eagerly anticipated return of the pandemically thwarted âSinginâ in the Rainâ at the Des Moines Community Playhouse. Add a diversity of live performances for the month, ranging from Hades, classic theatre â even a pig and a spider â and March can come in strong and roar throughout the entire month. Let the beckoning begin.

March 13, 2020. An historic date for the Playhouse. Opening night of a show that was to be a high point in their season. Within 24 hours, COVID would force the closing of this musical, and all live performing arts nationally.

The Culture Buzz had reviewed that opening night, stating, â âSinginâ in the Rainâ marks a major gem in the crown of successes by the Playhouse. It is a show that must be experienced, as those who do see it will be talking about this well into the future.â Gratification delayed; this show returns with its original leads rightfully earning their roles again in the new round of auditions. Leading this uber-talented company is director and choreographer Erin Horst.

âI grew up watching these iconic Golden Age movies,â Horst shares. âIâm an old soul at heart. I always wanted to be able to tap dance like Gene Kelly, Fred Astaire, Ginger Rogers, you name them. âSinginâ in the Rainâ is  challenging, because I have to find this balance between giving the audience all the great and memorable moments from the movie, while still letting my own creative ideas come to life. I think audiences are going to have a great time!â

With a resounding fanfare, the Civic Center stage hails the return to the best of Broadway. Des Moines Performing Arts (DMPA) follows the success of Februaryâs âTootsie the Musicalâ with the multiple (eight) Tony Award-winning âHadestown.â Filled with a bold vibrancy of the new generation of successful musicals, âHadestownâ will resonate with audiences well beyond the hallowed performing halls of the Civic Center.

DMPAâs innovations include a debut collaboration with Des Moines Metro Opera, as the Civic Center provides a unique, immersive experience with their presentation of âThe Magic Flute.â This innovative interpretation places DMMOâs singers in front of a series of projections, as they interact in real time with the imagery displayed. This becomes animation interacting with performers, leaving a richly satisfying impression.

Delving into its mission-based world of childrenâs literature is the Kate Goldman Childrenâs Theatre at the Des Moines Playhouse. âCharlotteâs Webâ brings this classic tale to vibrant life on stage, giving young (and, old) audiences the chance to reimagine the story that has charmed generations. Wilbur, the beloved porker, and his arachnid friend, Charlotte, take their audiences on the adventure of a lifetime.

Classic theatre anchors the Iowa Stage Theatre Companyâs mission, and they conjure another great play from the pantheon of the best of theatre. Eugene OâNeillâs âLong Dayâs Journey into Nightâ brings all of this gifted playwrightâs magnus opus to the stage, as this story peels each characterâs flaws into revealing light. OâNeill won a Tony for this play, as well as a Pulitzer (posthumously). ♦