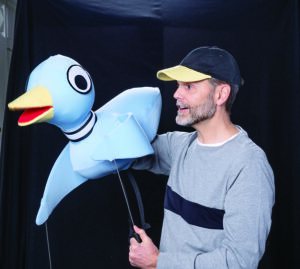 The Des Moines Community Playhouseâs childrenâs programming is one of Americaâs best. Its Kate Goldman Childrenâs Theatre (KGCT) will reverberate with performance and plenty of participation when âDonât Let the Pigeon Drive the Bus!â bursts onto stage, under the artful guidance of director Peter Dean. Based on childrenâs literature, KGCT plucks a gem with this hit family show when Pigeon feels under-appreciated and stifled in exercising his wants. Author/creator Mo Willems penned the book and wrote the musical.

âThe show will appeal to audiences of all ages because characters such as the Pigeon, the Bus Driver, and the Duckling, and the story itself, are right out of the Mo Willems books that parents have been reading to their kids over and over and over,â Dean shares.

This show allows adults to immerse themselves in the joy of experiencing this interactive show as the young charges they bring delight in its fast-paced story. The performance lasts about an hour, with no intermission.

KGCT shows also provide great opportunities for parents to share a book with children before attending, giving them familiarity with the show. These productions traditionally provide post-production chat, further exploring the themes in each show.

Dean explains, âThis is not a show that hits people over the head with a message or a moral to the story. However, as with all good stories, there are a few themes that kids might pick up on.â He continues, âDonât Let the Pigeon Drive the Bus!â explores issues of not getting what one wants, persistence, and trying different paths to success.

In the Temple Theater, Des Moines Performing Arts brings a blast from the past as presented in a format that honors the Golden Girls irreverence and humor. âThat Golden Girls Showâ parodies those beloved Golden Girls moments with puppets, and the show will be a laugh-filled delight. Sophia, Rose, Blanche and Dorothy return as miniaturized versions of their small-screen counterparts. Prepare for a laughing workout, as this is a show to share with a group of friends, or a perfect date night show.

Excitement builds as DMPA prepares to bring Broadway back to the Heartland. Several national touring shows are ready to make stops in central Iowa as DMPA welcomes the return of the best from the Great White Way in New York City. While there has been a dearth of top-tier talent blessing their Civic Center stage over the past two years, producers have worked diligently to literally get the show on the road again. Coming are âTootsie The Comedy Musical,â âRent â 25th Anniversary Farewell Tour,â âHadestown,â âMy Fair Lady,â and âHarper Leeâs To Kill a Mockingbirdâ â and, thatâs just through August.

For those who wonder what happened to âShen Yun,â the majestic movement masterpiece, it was rescheduled by the producers to grace the Civic Center stage Jan. 22-23. ♦