Returning to the stage 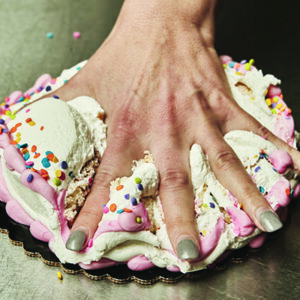 Itâs a piece of cake.

Iowa Stage Theatre Company has developed a wonderful recipe for performance success over the years. With a dash of classics, some flavoring with occasional musicals, and bold spicing with modern classics and new works, this company has found its niche in central Iowaâs theatrical producing ranks.

The pandemic created a topsy-turvy situation for everyone, and Iowa Stage was not immune from the impact of having to shutter live performances. They adapted, developing some enticing and well-executed virtual performance opportunities for their fans. Production value was high, and they connected with a national network of similarly adept companies presenting some of the best works that would adapt well to this new medium. Still, Iowa Stage deeply longed for a return to the bare boards and a live audience.

The wait is over, the oven is warming up, and a show that was ready to head into tech week but was so rudely halted due to COVID is ready to bake. âThe Cakeâ opens Nov. 12, and the friendly confines of the Stoner Theater in Iowaâs grand Civic Center is the venue. Director Jennifer Nostrala recalls that gut-wrenching day early in 2020 when they had to cancel the show.

âWe were getting close to tech week for the show when the pandemic was starting. These actors were in such a great place with the show that I was looking forward to sharing it with an audience. And the day we canceled it was hard.â

Nostrala knew in her creative core that ââ¦the humanity of this show is better experienced as a community rather than alone watching a screen.â

That decision proved to be a good one. Bekah Brunstetterâs dramatic comedy brings cultural clashing down to a very personal, very human level. Della is a Southern conservative who makes cakes, not decisions. She leaves that to her husband. When Jen, the girl Della raised like a daughter, returns home, Della is asked to bake the cake for her wedding. Della did not expect Jenâs betrothed to be another woman. Della must make her own decision, and the cake becomes the nucleus of an emotional bomb.

Offering a few more glimpses into a script that beckons to be experienced, Nostrala continues: âDella learns there are two brides, and she backs out of making the cake. Jen is crushed, and we witness the impact of the rejection. We then see Dellaâs struggle with trying to come to terms with how âfollowing the rulesâ impacts her. She is not triumphant; she, too, is devastated. And Della begins to question her understanding of the world. These human interactions â these moments of pain and joy â are what the play is about.â

âThe Cakeâ is a masterful, artistic exploration into the complexities of societyâs principles. Iowa Stage takes their time to find scripts that have been hailed for their content, and Brunstetterâs play is a gem. Delivered with dashes of wit, humor and chilling drama, celebrate the return to live theatre with this thought-provoking masterpiece, knowing that it is in the very capable production hands of one of Iowaâs most consistent theatre companies when it comes to production values. ♦