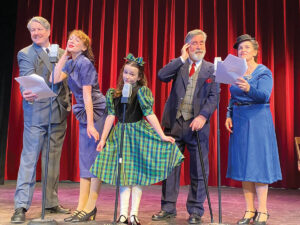 Creatives often have to embrace patience. This contradicts their strong âtake chargeâ mindset during the creative process. The patience side of performing artistsâ yin-yang is currently being tested. They thrive in the live performance environment. They feed off of audience response, while elevating their performances from that stimulation.

Many performers, from the local to the global scale, are adapting to virtual performances. It may not be a completely gratifying substitute for live performances, but it may be the sustenance that will allow this vital social/community component to survive as the world continues to forge through the morass of the pandemic.

Producers in central Iowa are finding their way, and the paths are divergent. While many volunteer-driven operations, often reliant upon renting performing halls, have gone dormant, others are finding ways to produce new content and share it. One benefit for those presenting online is that they are finding new audiences, since physical attendance is not an issue.

How are they making it work?

DMPA is launching a series of engagement opportunities, from streaming of national acts in their Virtual Performances series (including âJagged Little Pill,â which had earned 15 Tony Award nominations before Broadway went dark), to more intimate opportunities for patrons to get to know their central Iowa venue and national artists better. Creative Conversations and Civic Center tours give patrons the chance to better get to know artists, while also having a rare chance to go behind the scenes to see how those Broadway Civic Center shows are presented. The Wizardâs curtain is pulled back.

The Playhouse continues its role, leveraging strong safety COVID protocols to present limited-audience live performances. Their next production celebrates the season, as an adaptation of âMiracle on 34th Streetâ will be presented as a live-audience radio performance. Patrons will experience the thrill from the golden age of radio shows.

âOur next production, âPlayhouse on Air Presents: Miracle on 34th Street,â is planned to run Dec. 4-20 with shows Thursday and Friday at 7 p.m., Saturday and Sunday at 2 p.m.,â Artistic Director Katy Merriman shares. âWe will also have both mainstage and childrenâs theater productions in the spring of 2021, beginning in February.â

The Playhouse will even offer virtual attendance for select performances for those who yearn to reconnect.

Iowa Stage is taking a different route in continuing its mission, working with producer Hunter Arnold to kick off the holiday season with a special filmed version of Charles Dickens beloved holiday classic âA Christmas Carolâ starring one of the finest stage actors of our time, Tony-Award-winner Jefferson Mays. This streaming is sure to be a wonderful audience pleaser and will serve as a fundraiser for Iowa Stage.
Theatre Midwest previously launched its virtual Fresh Produce Concert Reading series and continued their offerings with their recent âThe Thanksgiving Play.â Their next show is âNickel and Dimedâ and will be presented in February. A live audience production is planned for spring of 2021.

ACT proves that where there is a will, there is a way â when it comes to finding outlets for their performance desires. They have been producing their Readers Virtual Theatre, a series of fun and engaging scripts. âFish Storyâ was the comedy presented in November. Connect with this determined organization to receive notices of upcoming virtual presentations, locally produced.

Despite these challenging times, persistence pays off for Tallgrass Theatre Company. They have a new location, remaining in West Des Moines, as they convert the former Skate West into their new theater complex. The light at the end of the tunnel glows a little brighter.