Is that a glimmer of stage lights we see at the end of this dark cultural tunnel? 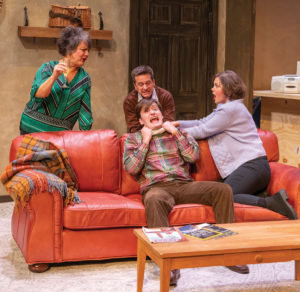 Two-hundred-and-nine days. That is how long it has been since the Des Moines Community Playhouse has presented live theater in its mainstage performing hall. It was the last of the local producers to do so. While they created an outdoors experiment with their drive-in theater in the parking lot, theater, as patrons know and expect it, has not happened since they closed âSinginâ in the Rainâ on Saturday, March 13. The parking lot performances were a small panacea for those thirsting for shows. They were well presented. Still, sitting in a darkened theater, waiting for the opening of the curtain or a sound cue to begin a production â that would have to wait.

Fast forward to Oct. 10. Through a major evaluative process, the Playhouse opened the first of its two repertory shows to be presented in their theater. âWeekend Comedyâ and âI and Youâ started their runs, alternating weekends. Seating would be limited to 25 percent capacity maximum. Masks were required at all times, except when briefly consuming concessions. Hand sanitizers were scattered throughout the building. The shows were presented without intermission, a fact well-advertised in advance, to minimize restroom usage. Restrooms were cleaned after each patron usage.

The curtain did rise, though, and a cautious sense of normalcy radiated from the grandaddy local producer. Laughter, applause and audience reactions resonated from inside the mainstage performing hall. Strangers gathered to communally share live theater with real sets, lighting and sound design. It was sublime.

The Playhouse holds an advantage over other theater companies in central Iowa. They own their own facility and have enough space to accommodate audiences. Other companies rely on renting space, which was severely curtailed without a revenue stream to justify rental costs.

Virtual programming became the option of choice during this transition. Initial virtual performances gave patrons a mixed bag of results. There were technical challenges. Companies opted for staged or concert readings to minimize pre-production challenges. Some earlier productions during this theatrical learning curve time had uneven quality. Still, companies were experimenting with ways to reconnect with their audiences. Fresh local performance art was happening.

âTuesdays with Morrieâ by Iowa Stage Theatre Company felt like the first production since that March cessation date that was a true virtual stage performance. Iowa Stage guided their process carefully, selecting a great script with a small cast that could be delivered with minimal staging. Thoughtfully added production elements â sound design, props management â were skillfully included. The production value for the broadcast was balanced. This performance also had an engaging pacing and energy.

There is light at the end of the tunnel, but the view is from the wheelhouse, looking into a variety of tunnels. Some have a stronger glimmer than others. Some remain dark. Most importantly, theater companies are finding ways to entice and engage their audiences again. Social media has been buzzing with news and updates. Some shows are fully ticketed, such as the Playhouse in-theater tandem. Others request online payment to support the production costs. Some offer the events at no cost, giving viewers the option to send in support. All companies have suffered during this time, and all have put the retooling of their production work in context of the bigger pandemic picture. For many seeking an aesthetic diversion from this bigger battle, check out what our communityâs resilient theater companies are offering. You may be pleasantly surprised, and your participation will be gratefully welcome.