Playwright David Lindsay-Abaire dips his pen into his wickedly witty ink for âWonder of the World.â 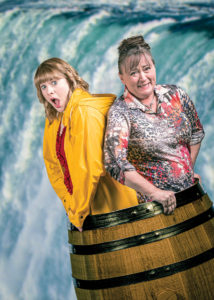 Allison Bollinger, (Cass) and Suzie Oddy (Lois) are over a barrel in the Tallgrass Theatre production of âWonder of the World.â Photo by Dylan Heuer Photography

The beauty of living in a land of rugged winters is finding the indoor options that beckon to sweep us into compelling stories, rollicking comedies or even interactive experiences. February is filled with plenty of options, from national touring productions on the Civic Center stage to excellent locally produced options for youth through older audiences, from G-rated to âgee, did you see this show?â Be a cultural adventurer and sally forth into the chilly wilderness of this season and allow the power and talent to warm you to the very core of your aesthetic sensibilities.

An iconic, well-known musical comedy and a relatively new comedy grace two stages this month. The Des Moines Community Playhouse presents the classic musical âSinging in the Rainâ and Tallgrass Theatre Company closes its season (and bids farewell to its original performing home it developed in Rex Mathes Auditorium) with âWonder of the World.â Both shows offer laughter-filled escapism in live theater, one with plenty of song and dance, the other with off-the-wall, fast-paced comedy.

Playwright David Lindsay-Abaire (of Fuddy Meers fame) dips his pen into his wickedly witty ink for âWonder of the World.â His signature quirkiness is running on all cylinders in this show, which follows a wife who suddenly leaves her husband when some bizarre aspects of his personality manifest. She treks to Niagara Falls via bus in search of freedom, enlightenment, and the meaning of life. She also finds an eccentric band of characters who enhance the whimsical story that ensues.

âWonder directorâ Tom Perrine shares his thoughts about this script.

âThis comedy is (written by) one the best contemporary playwrights in America. The script was written over 20 years ago, but the content still works today. The script borders on being a farce, with laugh out (loud) moments. Much like Neil Simon, David Lindsay-Abaire is a master at setting up a joke, telling the joke, and then repeating the joke, taking the audience on a wild ride with characters that are totally believable, loveable, and flawed. This script has been on my directorâs Want To Do List since I first read it about 20 years ago. I love its quirkiness, its âYup, they went thereâ humor.â

The Playhouse pulls from the golden age of movie musicals with âSinginâ in the Rain,â a 1952 film that fans easily hold in their Top Ten list. In 1983, in Londonâs West End theater district, producers attempted a stage adaptation with the iconic rain scene. The Playhouse first produced this musical during their 1995-96 season, and fans have been eagerly awaiting its return. This production is being guided by talented director and choreographer, Erin Horst.

âI grew up watching these iconic Golden Age moviesâ Horst shares. âIâm an old soul at heart. I always wanted to be able to tap dance like Gene Kelly, Fred Astaire, Ginger Rogers, you name them. So when the opportunity came to direct and choreograph âSinginâ in the Rain,â I jumped at it. Itâs challenging, because I have to find this balance between giving the audience all the great and memorable moments from the movie, while still letting my own creative ideas come to life. It was very important to me from the beginning of the concept and design process, that we pay homage to 1920s Hollywood and all the famous actors of the time. Youâll recognize some of your favorite tap steps from the film, and I dare you not to smile while youâre watching Don Lockwood dance in âSinginâ in the Rain.â I think audiences are going to have a great time.â