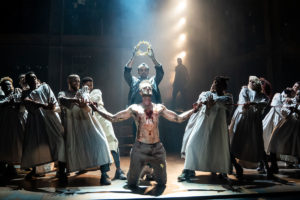 James Delisco Beeks (as Judas), Aaron LaVigne (as Jesus) and the company of the North American Tour of âJesus Christ Superstar.â
Photo by Matthew Murphy

Anyone who has followed the world of musical theater for any length of time recalls the opening rock guitar riff that signaled a dynamically different spin on the Jesus story. âJesus Christ Superstarâ is celebrating its 50th anniversary, rejuvenating memories of those who have grown to love this iconic rock musical while instilling that special magic into new generations of fans. Andrew Lloyd Webber and Tim Rice captivated the world 50 years ago with a bold concept, brash music and a mesmerizing and moving interpretation of the Jesus story.

The production team from Sir Andrew Lloyd Webberâs group took a year to cast this national touring production. Each ingredient for this golden tour needed to be perfect. Aaron LaVigneâs first submission of an audition tape (many more, plus in-person auditions in New York City and London would follow) happened well into the audition process, yet more than six months before he received word of landing a dream role: Jesus in âJesus Christ Superstar.â

Extensive auditions were held in New York City, plus London and other U.S. cities. The production company is based in Londonâs Regentâs Park Open Air Theatre. A 2016 sell-out production there won the Olivier Award for Best Musical Revival and Evening Standard Award for Best Musical, perhaps hinting toward grand things to come as the 50th anniversary was approaching.

âTim Sheader, director, and Tom Deering, musical director, had specific ideas about what they wanted,â explained LaVigne (âSpider-Man: Turn Off The Dark,â âRentâ). âIt took (me) five months to get the job. Itâs a gift; itâs an honor. This is an iconic role.â

Inspired by the 1971 Billboard Album of the Year, âJesus Christ Superstarâ is filled with a timeless energy from its unforgettable score. Arguably one of the most physically demanding Broadway shows to perform, its power is sure to resonate with its audiences, leaving a memorable experience in its wake.

âThe idea that Iâm bringing a lot of humanity to the role is something Iâm proud of,â LaVigne continues. âItâs a pretty strong response that weâre getting from the show. Itâs what the (production) team wants and what weâre trying to do. I think our production has an inner radiation that begins with the music. Itâs an homage to the original concept album, the âbrown album.â Thatâs really what weâre doing; weâre dropping the needle on that album. The orchestrations are powerful; theyâre beautiful. The band is insane. Itâs all based on music. In this production, Jesus is a singer/songwriter. This tells the story about Christ and how his music makes him a superstar but also destroys him.

âThis production has a very particular way of telling the story. The ensemble is like a bee hive, like a mob. The choreography is very physical, very tribal, ritualistic. These singers are fantastic, and on top of it, itâs almost like a killer rock and roll show, like a concert.â
âJesus Christ Superstarâ celebrates its 50th anniversary, which includes a week-long run in the Civic Center beginning Jan. 14. Patrons should anticipate a rousing, memorable evening of live performing arts. As LaVigne says, âThatâs really what this is â an experience.â