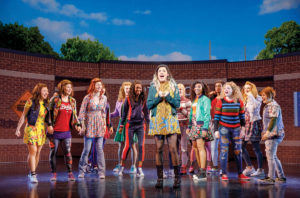 With some different twists to the familiar odd fish in an established hierarchal pool storyline, the advance promo shares: âCady Heron may have grown up on an African savanna, but nothing prepared her for the vicious ways of her strange new home: suburban Illinois. Soon, this naÃ¯ve newbie falls prey to a trio of lionized frenemies led by the charming but ruthless Regina George. But when Cady devises a plan to end Reginaâs reign, she learns the hard way that you canât cross a Queen Bee without getting stung.â

In a recent interview with Jonalyn Saxer (Karen Smith in âMean Girlsâ), she shared some wonderful insights about her artistic journey. Saxerâs previous Broadway shows include âCatsâ and âHoliday Inn.â She also is in the late 2020 release of Steven Spielbergâs remake of the movie musical, âWest Side Story.â

Asked if this show, based on the 2004 teen comedy film, successfully adapts to the stage, Saxer agrees, âIt really does, especially as a musical. Tina Fey and Jeff Richmond have said that the characters that were originally written for the screen are such above and beyond characters that it seems natural for them to sing or dance or be in musical numbers.â

Saxer has been with âMean Girlsâ since its origins in March of 2017, when she was part of the workshopped development of the show. She was in the original cast when it opened on Broadway April 8, 2018. She welcomed this opportunity to join the national tour in the role of Karen Smith. Des Moines Performing Arts, will be just the third stop for âMean Girls.â

Saxer continues, sharing about her role in âMean Girls.â âKaren is one of the three Plastics, who are the popular pretty girlsâ¦she is a joy to step into her very high-heeled shoes every night because to make the lines and the humor work for this role itâs about how she views the world around her, and I think at her heart Karen is very happy and happy-go-lucky.

âThis ensemble of dancers in this show is absolutely incredible,â says Saxer, adding with an enthusiastic laugh, âand the voices that you will hear are astonishing. I still am amazed of the sounds that come out of my coworkersâ mouths.

âOur fan base for this show is so widespread that itâs very exciting to take it (this production) to those people who donât have the chance to come to New York. Through social media, itâs exciting to hear from our fans that the show is coming to their town.

âThis show is one of the easier shows to keep it alive, partly because itâs a comedy. The audience is so much a part of the show, and each audience reacts differently, so each night is a little bit different. The director inspires massive amounts of energy from the cast during rehearsals, which makes it natural for us to perform that way for each show.â