From love to murder in musical comedy extravagance 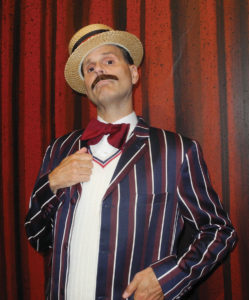 September marks the start of Greater Des Moinesâ 2019-2020 theater season. A promising array of musicals, comedies, family theater and drama await the cultural consumer. More than a dozen companies will present about 50 productions, beckoning patrons from near and far to join in the unique communal experience that only live theater delivers. Tens of thousands of theater-goers will be able to savor the stimulating fare presented in a variety of performing halls.

Still in the afterglow of its centennial season, the venerable Des Moines Community Playhouse launches the first of its next century of shows. âA Gentlemanâs Guide to Love and Murderâ starts this next era with a bang. And, quite a few other life-ending scenarios, to be sure. Imagine if Agatha Christie and the Marx Brothers collaborated to produce a show. Such is the musical mayhem that begins Sept. 6. This musical comedy romp rips through successive heirs as a conniving illegitimate son, Lord Montague âMontyâ DâYsquith Navarro, ninth in line, plots his way to inherit the family fortune. 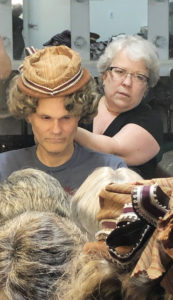 Brett Spahr is fitted for the wig by Costume Designer Angela Lampe for another of his nine characters, Lady Hyacinth DâYsquith. Photos courtesy of Des Moines Community Playhouse

Broadway audiences quickly embraced this show, which won four Tony Awards (including Best Musical), filled with lavish costuming and scenery, great music and exceptional action. John Viars will be making his directorial swan song as a full-time staffer for the Playhouse with this show. He recently shared some of his thoughts about what makes this script unique.

âThe music is great, the script is complex, and the challenges are many. The whole company is having a ball,â Viars says.

When asked about the inevitability of musing about his professional curtain call, he continued, âThe Playhouse is in a good place, probably the best place itâs been in my 37-year tenure. The theater facility is practically brand new, the productions are high quality, the staff is at its creative peak, and our programs serve even larger portions of the community. Iâm loving every minute of my final days at the Playhouse and am grateful for the opportunity Iâve had to live in this fantastic city and work at such a great job for so many years. Thanks, Des Moines. Thanks, Playhouse.â

In a show filled with actors playing multiple roles, none has a more creatively daunting task than Brett Spahr. A veteran of many shows over the years, he knew that this musical would present some very special challenges. When asked about how he approached his cast-within-a-cast, Spahr replied, âJourney or trial-by-fire… Iâm not sure which expression best describes my process. To create the voices for the nine members of the DâYsquith family, I have spent a bit of time studying old movies â âHarry Potter,â âOliver Twist,â YouTube and Terry Thomas clips, to name a few. Learning and practicing the physicality of each character, oftentimes around the house, has been an experience as well. The director has been key every step of the way. I knew when I auditioned, that âthe familyâ would be a challenge, if I was cast. I was right, but oh what fun.â

Playing nine characters, male and female, young and old, will test even Spahrâs thespian dexterity.
An authentic Victorian-era costuming palette is essential for this showâs success. The Playhouse probably felt quite confident in tackling this show by having veteran designer and Cloris Award-winning Angela Lampe on staff.

âI guess what is unique about this show in particular is the significance of the quick changes,â explains Lampe. âHaving one actor play all nine members of his own family (Spahr) is a great device. We are utilizing every trick in the book and inventing a few new ones to (allow quick costume changes). We must make each costume look like detailed Victorian garments befitting each lord or lady, while streamlining them so that they go on and off in seconds.â

Murder, love and fast-paced merriment abound in this musical perhaps best described in the following lyrics from the YouTube promotion: âFor those who doubt death can be funny, weâre here to tell you it can.â The Playhouse extends an invitation to escape into the memorable magic, which this musical theater will deliver.