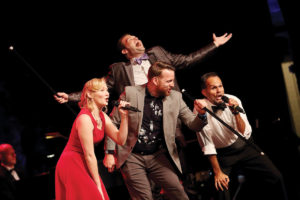 Each August, a celebratory event unites the Greater Des Moines theater scene. The final Sunday marks the Greater Des Moines Cloris Leachman Awards for Theatre Excellence, now in its fourth year. Inspired by the pinnacle of theater recognition, the Tony Awards, the Cloris Awards echo the legacy and vision of the Tony Awards namesake, Antionette Perry. More importantly, these awards represent the hometown beginnings, achievements and drive that Cloris Leachmanâs career embodies. In 2015, Leachman gave her blessing to use her name for these awards. She was the guest of honor at the 2016 awards. She stays in close touch as the popularity of these awards continues to grow in its new location, Hoyt Sherman Place Theater.

While chatter about forming a theater awards event began years ago, critical mass was reached to establish the Cloris Awards in 2014. The event blossomed. Now, six experienced, qualified judges work together to adjudicate each qualifying show produced by Greater Des Moines theater companies. That totals approximately 50 productions each season, from Aug. 1 to July 31.

âThe Cloris Awards are important to the Des Moines community,â explains Denis Hildreth, a retired drama teacher and a current Cloris judge. âThey show off a vibrant group of theater companies, which enrich the metro area greatly. (The Cloris Awards) also highlight all theaters. As a teacher, theater professional, former member of theater boards and all-around fan, I want to see a theater scene which continues to grow and remain vibrant.â

Thanks to efforts by the Cloris team, this yearâs event is free, designed to bring more patrons, families and theater practitioners to experience the Cloris Awards. The program features awards and musical selections from each company that produced a musical, a highlight of the evening. Follow this event on Facebook at www.facebook.com/ClorisAwards.

âIntimate Apparelâ is set in New York City circa 1905. Esther, a black seamstress, lives in a boarding house for women and sews intimate apparel for clients who range from wealthy white patrons to prostitutes. Her skills â and her discretion â are much in demand.

âIntimate Apparelâ runs Aug. 17-26 at the Stoner Theater in the Civic Center. Tickets are available through Des Moines Performing Arts and at their box office. The Associated Press hailed this show as ââ¦a near-perfect balance between content and execution.â

Anchored by the Des Moines Community Playhouseâs centennial season, Greater Des Moines will offer about 50 productions for your consideration, including musicals, comedies, drama and family-friendly shows.

â¢ Des Moines Community Playhouse â Opens with âBilly Elliot the Musicalâ Oct. 5. This will be the first show in the completely renovated theater. www.dmplayhouse.com

Most of the companies offer special pricing for season packages, multiple-show/ticket. Packages or group rates. Independent companies may add productions to this season, too.