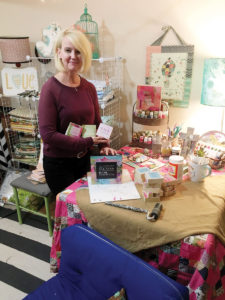 Amylee Weeks makes her own custom blocks through her business Hidden in My Heart. A few years ago, her designs became licensed, so she began making custom designs as well as designs for
manufacturers to sell. Eventually, the licensing component of the business took over most of her time. Photo submitted

The Iowa Cubsâ field at Principal Park is no exception, which is why the Des Moines parks officials inquired in 2006
about the Cubsâ grounds crew performing the maintenance for the soccer fields at the James W. Cownie Sports Complex.

That chance opportunity to start caring for the fields has turned into a millions-of-dollars-a-year revenue opportunity
for the Iowa Cubs organization and the creation of a side business, Iowa Sports Turf Management.

The organization didnât intend to branch off into turf maintenance in 2006 with the addition of field construction and renovation services in 2009, says Casey Scheidel, president of Iowa Sports Turf Management, but it evolved over time.

âI think it just kind of came to us because people saw the high level of quality Principal Park had, and they wanted it for their own fields,â he says.

That first year, the company had $200,000 in accounts. Today, Iowa Sports Turf Managementâs accounts provide between $6 million and $7 million in gross revenue. The company mostly performs work in Iowa, Nebraska and Minnesota but recently worked on construction of a Triple-A baseball facility in Wichita, Kansas.

The Iowa Cubs arenât the first company to start a side business or two. Some of the most well-known brands started as side businesses.

Success can be determined from a variety of factors that include hitting the market at the right time and putting in hours of hard work.

At the time the Cubs started offering their services, there were other turf care companies, so business started slowly and was mostly by word-of-mouth.

Scheidel was hired the year the Cubsâ ground crew started working in Des Moines. He helped oversee the construction of the baseball fields at the Cownie Complex, which the grounds crew also maintained.

âOther people started to catch wind that we were essentially farming out our services or taking our services out of Principal Park and into the community,â Scheidel says.

High schools were the next to call. They wanted help spraying weeds, fertilizing and aerating their football fields. More and more schools hired the crew to maintain other sports fields, as well.

Eventually, an inquiry was made about replacing the sod at Ballard-Huxley High Schoolâs football field. The crew tore out, re-graded and re-sodded the field, which sparked the construction side of Iowa Sports Turf Management.

More employees â 32 work during peak season; otherwise, there are 18 full-time employees â were hired to work on the construction side, where they started to build and renovate athletic facilities in central Iowa.

Today, Iowa Sports Turf Management â the company became a separate entity from the Cubs in January but is still owned by the organization â continues to maintain the fields at the Cownie Complex, as well as the baseball fields at Holiday Park in West Des Moines and the fields at numerous high schools in the metro area.

Chris Diebel attended college for advertising and public relations. He fell into the restaurant and hospitality industry.

âI definitely saw myself in the agency world, not the hospitality world,â he says. âIt was sort of an accidental introduction to hospitality that got me where I am today.â

Diebel took an internship with Harry and Pamela Bass-Bookey, who were renovating the Temple for Performing Arts building in downtown Des Moines. They hired a hospitality company called Orchestrate to create a restaurant for the main floor of the building. He met the owners of the company and worked closely with them during his internship. Throughout college, he helped manage private events in the ballroom.

After college, Diebel moved to Los Angeles and worked for a public relations firm where many of his clients were in the hospitality industry. After he moved back to Des Moines, he utilized his connection with Orchestrate to work for the company to help launch restaurant brands and market the companyâs restaurants.

In 2013, pop-up restaurants and retail stores became the rage. Orchestrate decided to do a pop-up of Bubba at Hoyt Sherman Place. The original plan was for it to be for one weekend. It was so much fun that Diebel starting thinking he might want to do a real restaurant.

Eventually, a space opened in a former brewery, and it was retrofitted for Bubba, Diebelâs first restaurant. A few years later, he and a friend opened Teddy Maroonâs on Ingersoll Avenue.

Now, instead of working for Orchestrate and marketing other restaurants, Diebel has hired Orchestrate to help run his restaurants and promote them through social media.

Diebel still uses his public relations and marketing skills in the restaurant industry. Being able to create brands from scratch is a privilege for someone who went to school for marketing, he says.

âItâs fun to work on other peopleâs brands, but itâs intensely personal when itâs your own, and thatâs been very, very rewarding,â Diebel says.

Be prepared to work long hours 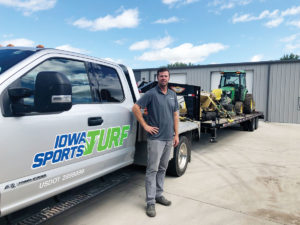 Casey Scheidel, president of Iowa Sports Turf Management, near some of the equipment the company uses to maintain sports fields and complexes in the Des Moines area. Photo by Melissa Walker

The most successful second business ventures often take hours of extra work, which means entrepreneurs may find
themselves working on the weekends or late at night, according to Forbes magazine.

Thatâs why business owners who truly want both ventures to succeed need to devote time each day, even if itâs only a few hours, toward the second venture, business experts say.

Even then, business owners need to be realistic about their time. They might be excited about the new venture, but do they really have the time to devote to making it a reality while keeping the original business going. If not, they may be able to hire someone to handle the day-to-day responsibilities of the first business while providing oversight and their focus to starting the second business.

Amylee Weeks spent months using Mod Podge to glue designs and inspirational messages onto wooden blocks for her business, Hidden in My Heart. She sold them through Etsy and at craft fairs until she was contacted by a major
manufacturer to create her own brand that would be licensed.

âI initially set out to have a website where I would hand make the products and send them out, and then maybe I would do wholesale,â she says.

Preparing for shows took up most of Weeksâ time because that was her immediate income. Sheâll make about 50 to
75 blocks for a show.

âThere were many times I was up at 4 making the blocks, getting them out in the mail and having the kids package them with me,â she recalls. âThen I would have design time at night to get those designs out to my agents.â

Time management is one of the biggest challenges for those with multiple businesses, experts say. It will likely
require the business owner to delegate responsibilities to others in order to manage responsibilities. 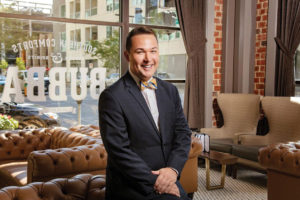 Chris Diebel helped market and promote restaurants before he received the idea to open his own and now uses the company he worked for to help support his venture. Photo submitted.

Business owners need to decide what they want out of their new endeavor, according to Forbes. Do they want a business that they can run alongside their original venture, or do they want one that can take off and produce enough income they can switch focus?

Weeks knew her ultimate goal was to license her work. Within a few months of working with manufacturers to license her designs, she was so busy she couldnât keep up selling her own ideas on her Etsy page.

Now, she makes her blocks with her designs for a couple of art fairs each year, but most of her time is spent creating new designs and lines that will be licensed for production of items that are sold in stores, whether itâs her Bloom by Amylee Weeks that sold in Hallmark or with a new linen company for kitchen textiles or an upcoming calendar that will sell in Israel. 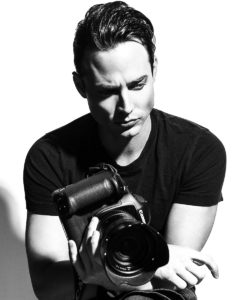 Ben Easter worked as an actor before transitioning into a career as a photographer. Photo by Ben Easter

Ben Easter spent years in front of the camera. He was an actor in film and television and enjoyed the story-telling aspect the most.

An invitation to Paris and the Cannes Film Festival changed his life.

âI was so inspired by the world around me,â he recalls. âI felt this intense need to take photos with this dinky camera I had, but I didnât care.â

He had an opportunity to work on a biopic, which gave him his first professional work behind the camera. He spent two years back and forth between the United States and Paris working on the film, behind the camera the whole time. The story along with its script and photography changed acting for him.

âIt just wasnât filling me up (anymore), but I think that whole thing was preparing me to step behind the camera,â Easter says.

He continued to take parts for a few more years as his photography business, now Ben Easter Photography, gained ground. He drifted away from acting completely about five years ago but says that time in front of the camera has given him a better perspective for his photography.

The transition from acting to photography was a smooth one for Easter. He was also teaching yoga at the time, and the day came when he had to choose where he was going to invest his time and energy. He chose photography and now focuses mostly on commercial work with some fine art work.

âI think it was not a conscious thing (choosing to become a photographer), but, yes, because I was obsessed with storytelling and creativity, I knew I wanted to be an artist,â he says. âWhen I look back now, a lot of things made sense.â ♦