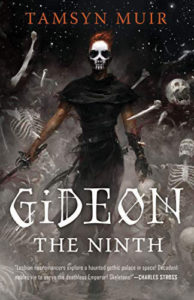 Serious fiction is important and valuable to the societal landscape, and it is rightly a focus of much
scholarly work. However, sometimes you just need a crazy adventure story with necromancers, lesbian swordswomen and a premise so weird and wonderful that you canât look away. âGideon the Ninthâ is exactly that book â ridiculous, wonderful, surprising and, above all else, powerfully entertaining. It takes serious craft to make something this outlandish and odd into something compelling and beautiful.

Gideon is a lowly bondswoman, sworn to the haughty and cruel heir to the Ninth House,
Harrowhawk. Their lifelong enmity suddenly changes when Harrowhawk winds up in a battle for immortality, and the only person who can help her is Gideon. Forced to combine forces in a fight for their lives, the pair must contend with mysterious and deadly circumstances, all making for a fastpaced, twist-filled story that will leave you desperate for more.

I donât know where Tamsyn Muir has been hiding, but Iâm so excited to see where she takes us next. Take a risk on something new and read this book. You wonât regret it. ♦ 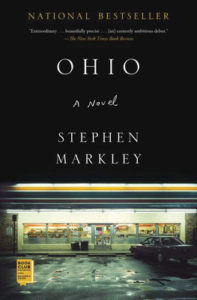 In the summer of 2013, four high school classmates head back to New Canaan a decade after graduation. Not knowing the others are travelling there, too, they each head back to their hometown for a different reason.

The novel begins with a grim parade for Rick Brinklan, one honoring his ultimate sacrifice, âKIA in
Iraq.â The story is told in four main parts, and Rickâs high school friend, Bill Ashcraft, is profiled first as he drives into town to deliver a mysterious package that is taped to his abdomen. Political activist and substance abuser, we begin to be introduced to the other Canaanites through his reveries and flashbacks.

Stacey Moore drives in next, honoring a request to meet with the mother of the girl she fell in love with in high school: They both want to find her. Weâre introduced to Dan Eaton in the following portion, a damaged, thoughtful, three-tour veteran of Iraq home to see his parents and reconnect with Hailey, the high school girlfriend he lost to the war. In the final explosive, shocking section, Tina Moore sneaks away from her fiancÃ©âs bed and her shift at Walmart to track down Todd Beaufort, the abusive high school star football player whom she dated and loves.

A bleak and devastating story taking place within just one day, Markley expertly carries us to the horrifying finale where revenge is taken, secrets are revealed, pursuits and dreams are extinguished, and the characters are left mired in regret and suffering. ♦