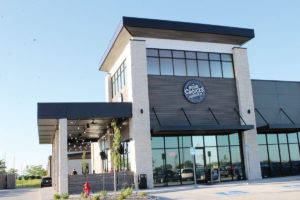 Temporarily shutting down a new neighborhood bar less than a month after it opened is not how the owners of Pour Choices envisioned their restaurant debut. But they are glad to now be open and serving hungry and thirsty patrons some new choices in pub and food fare.

Pour Choices, located off Highway 141 in Grimes, originally opened up Feb. 18 in a new retail development. After a short shutdown, Grimes’ newest bar and entertainment venue is back to doing what it does best: beer, cocktails, burgers, pulled pork, chicken and don’t forget the sweet potato fries.

The large patio facing the highway can be a bit noisy during rush hour, but that is mostly masked by happy patrons chatting and laughing. A happy hour from 2-6 p.m. includes dollar-off drinks. For a summer cool down, try the slushy frozen flights, where you can sample rotating flavors such as boozy cherry limeade or a low-calorie strawberry lemonade.

The Mega PC Mule is a two-handed oversized copper cup and is refreshing to sip and share with your non-COVID friends. At $18, itâs a bargain beverage.

The fresh food is well thought out. Burgers are made with all-Iowa, high-quality beef. In-house homemade sauces and flavored thick bacon complement the dishes.

Striving to keep food and drinks consistent, they offer just 20 items on the menu. Co-owner Richard Andraschko says heâs gone to hundreds of restaurants, saying, âIâd question why they did something and think, Iâd do that differently if I had a restaurant.â

Richard and his wife, Tracy, along with her daughter, Jordan, say they always wanted to open a restaurant. They spent three years looking for a spot. In their current location, the developer was building a patio, which made it an easy decision.

âWe thought itâd be a great location. Itâs easy access, and thereâs nothing like it in Grimes,â he says.

During the first few weeks of opening, live music by the band Suede was featured. Richard says, âWe had a great crowd. We want to keep having live music but are not sure when that will happen.â

As a local business owner â he formerly owned Sky Zone Trampoline Park â he says owning a restaurant is like any other business.

âTake care of it,â he says. âKeep it clean. Have good food. If we charged an arm and a leg, people might come once but wouldnât come back. We try to have the best food and drink at competitive prices so they return.â ♦