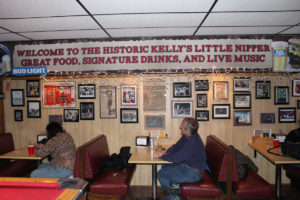 As I sat chatting with the bar patrons at Kellyâs Little Nipper, we pondered the barâs appeal. Austin said itâs like the âCheersâ bar, where everyone knows your name.

When we asked the millennial bartender, Elsie, if she knew what the âCheersâ reference was or if sheâd seen the show, she replied, âNo. But Iâve seen the âGolden Girls.â Does that count?â

This banter is one reason why patrons keep coming back.

The small dive bar, located at 1701 E. Grand, built in 1908, was previously a general store and a brothel. In 1940 it became a bar and holds the second oldest liquor license in Polk County.

In June 2016, Jeff Stark purchased the bar. He worked in the corporate world and dreamed of opening his own bar. He finally got the âgumptionâ and searched strip malls and suburbs for locations, and a year later he found the Nipper.

âItâs a dive bar with a great reputation. I saw an opportunity with an old historic place. Even though it was falling apart, it had potential if I got it cleaned up,â he says.

He put in a new outdoor patio, reminiscent of the old west; it has rustic barn boards and shaded trees. Live music performs frequently on Friday evenings.

âThey think that average is good, but thatâs not acceptable for us,â he says. âThe first thing you want from our staff is how they made you feel after you left the bar.â

Cleanliness is important to the bar owner â from the bathrooms to the kitchen.

âI control what I can control,â he says, âand thatâs whether the place is clean. People I canât control.â

People are what make the bar popular. A couple from Altoona enjoying half-price wings commented, âThe atmosphere is fun. The sausage sandwiches are great. You see everybody here â bikers, young people â you can be from any part of life.â

Stark agrees the place is a melting pot.

âI call us the Roosevelt High School of bars,â he says. âWeâre the melting pot, where race, religion, wealth â all comes together here. We have a great diverse citizenship and treat everyone with respect.â

Patrons often reflect about the rich decades-old Nipper history. A girl, Kelly, walked in the place and told the staff that her mom and dad met at the Nipper, so thatâs why she was named Kelly.

Folks of all ages enjoy a menu of favorites such as tenderloins, pizza and food specials.

âWeâre the only bar where you can party late at night and the next day, pick up grandma and stop by for lunch,â says Stark. ♦