Triangle Tap is a hidden gem

Dive bar has much folklore in 80-year-old neighborhood.

On the shortest street in Des Moines, Drew Carey of the âPrice is Rightâ yells, âCâmon down.â His voice blasts from the TV at the Triangle Tap, where mostly retired patrons play for prizes and drink specials during happy hour, starting at 9 a.m.

Once 4 oâclock hits, a different crowd shuffles in for a second happy hour. On a Wednesday night, bikers made the quarter-mile trek from the Inter-Urban Bike Trail for $8 pork chop night. 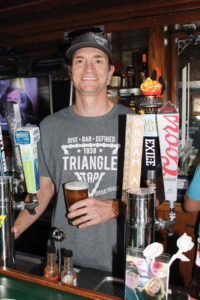 Owner Joshua Carman says he still has a day job that âhelps
support my bar habit.â On the back of Carmanâs shirt, it
says, âNot Your Grandpaâs Pickup Bar.â

The Triangle Tap owners admit to being a neighborhood dive bar that has been around for 80 years. Joshua Carman, co-owner, recounts the rich history of the Tap.

âFolklore says the physical structure used to be across the street,â he says. âLegend also says the location used to be in Beaverdale but was moved. Weâve got lots of stories and weâre not sure exactly whatâs true.â

The Triangle Tap is located on the half-block long Post Street at the corner of Euclid and MLK, across from the old Plaza Lanes.

Carman often relies on the long-term patrons who frequent the bar to provide history.

âThe neighborhood has supported this place over the years,â he says. âYou can run into someone who has come here for 40 years with their dad or grandpa.â

Carman and his business partner, Randy Stevens, invested in the Tap five years ago for a few reasons. Growing up in small-town Iowa with small taverns, Carman liked the charm and potential of it.

Carman says the neighborhood regulars make up the character of the bar.

âOur regulars are our bread and butter,â he says. âItâs like a hidden gem. You never know who youâll see here. Thereâs people from all walks of life.â

On a recent Wednesday night, he proved right. Bikers clad in spandex and bike jerseys pedaled in on road bikes, drinking Potosi beer. A businessman loosening his tie sipped on a cold Exile beer. Motorcyclists in black Harley shirts and bandanas sat next to a retired couple enjoying their last days before heading to Fort Myers Beach.

Carman knows the bar is not as easily accessible as some bars along bike trails, but he says the destination ride is worth it to discover a new place and talk with old friends.

âYou canât come in here and not know someone,â he says. ♦