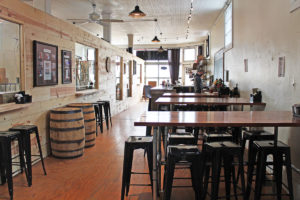 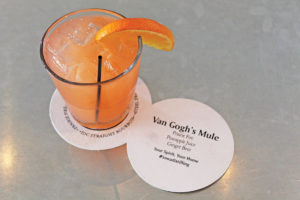 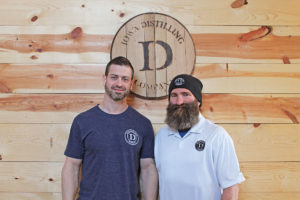 Overlooking a cornfield just 10 minutes south of Des Moines, the Iowa Distilling Company is in a picture perfect
rural setting. The ambiance inside the building is quaint and cozy. It features light-grain wood walls separating the production facility from the bar and craft cocktail lounge. Barrels are on display along with authentic wood tables, and thoughtful lighting is the perfect finishing touch to make the space feel inviting.

The stand-alone brick building is 112 years old and was originally a mercantile. The edifice has served as the companyâs production center since 2013, and it boasts Iowa state license No. 00008 for distilleries. (Iowa has approximately 20 distilleries.) Originally open to the public only for tastings, a new law that went into effect July 1, 2017 allows the business to include a craft cocktail lounge. A remodel was completed in September, and the company has been serving expertly crafted cocktails ever since.

The distilling company currently manufactures nine different labels, including vodka, rum, bourbon and whiskey â five under its own label. All are hand bottled and stickered; thousands are produced and shipped each month. A few of the liquors have won awards, including the companyâs popular Swell Zone Vodka and Straight Bourbon.

âIt is refreshing to sit there and get positive feedback and winning awards and medals in international-level
competitions,â Doyle says. âWeâre doing some amazing things here. Iowans should be proud of the stuff that we
can produce. Weâre using Iowa corn in our bourbon.â

One challenge the company and liquor industry has faced is that some customers say they donât like spirits.

âYou hear all these people say, âI donât drink hard liquor because I had that bad experience in college,â â Doyle says.

To try to overcome this, the company works hard to create uncommon cocktails that appeal to different flavor palettes. Restrictions meant they could only serve their own liquors, resulting in unique cocktails not sold anywhere else. One popular drink is the tropical tinged Van Goghâs Mule â Prairie Fire cinnamon whiskey, pineapple juice and ginger beer. ♦