Fast times at The Ridgemont 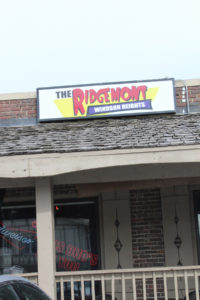 Friday nights at the Ridgemont arenât necessarily fast, but the drinks poured during happy hour go down quickly.
The bar, named after the coming-of-age teen movie, âFast Times at Ridgemont High,â is tucked away in Sherwood Forest, a seasoned Windsor Heights strip mall located off Hickman Road.

On a recent Friday night, patrons purchasing a well drink or beer received a poker chip good for another drink. What a deal â two for one on a Friday? And,even if you sneak out of work early, câmon in â happy hour starts at 11:30 a.m. weekdays and goes until 6 p.m.

Long-time patron Dave Griffin says heâs been coming to the current location since he was a teenager in the late 1970s. At the time, it was called Boarâs Head. Since then, the bar has undergone a half-dozen owners/names, such as the Tail, Ebenezer Frogs and more.

He likes the inexpensive happy hour and the family feel, although his friend seated next to him chides him for saying a bar is family friendly.

âEveryone here is nice. They know your name. Itâs like the Cheers bar. Thereâs a diverse set of people, and everyone is down to earth. The owners are great, too,â adds Griffin. âTheyâre always helping someone out.â

Before long, patrons clothed in Des Moines Buccaneerâs hockey logo gear filled the spacious sunken bar. The fans frequent the Ridgemont before and after games, an ideal location since the arena is just across the street.

A half dozen domestic beers, along with several craft and Iowa beers, are on tap. Numerous flavored vodka bottles line the shelves, and their main staples includes mixed drinks and Moscow mules.

Thereâs no food service, but bartenders can pop a frozen pizza into the oven for some nourishment.

âThey (Sean and Dory Stevens) are the best bar owners Iâve ever seen,â says Griffin. âThey will do anything for anybody. Itâs a good place to come and meet friends.â ♦