Friday, September 24, 2021
Join our email blast
At Home With

Beaverdale is their forever home. 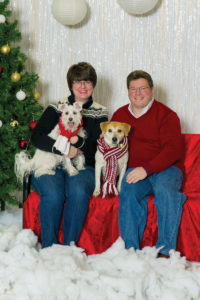 Sasha and Mike Kamper with their beloved dogs, Addy and Star. Photo submitted

While attending Drake University, Sasha Kamper would often drive through the Beaverdale neighborhood and enjoy looking at the cottage-style architecture. She appreciated the character of the older homes and the stability of the neighborhood.

âWe bought our first home in Beaverdale in 1992 and never planned to move,â says Sasha. âBut a house Iâd admired â and that was on my âshort listâ if we ever were to move â became available. Our new home is about three blocks from our first and about a block from Witmer Park. Beaverdale is our forever home.â

Originally from Lyndon, Illinois, a rural town about 45 miles northeast of the Quad Cities, Sasha and her husband, Mike, who was from St. Louis, met at Drake in Des Moines. After their marriage, they felt Des Moines was a good compromise between a small village and the big city. Beaverdale has been a perfect fit.

âI feel like I live in a small town; everyone is so friendly and engaged. The business owners call you by name,â says Sasha. âWe love to walk our dogs, Star and Addy, in the neighborhood, especially over to the park,â she adds.

Their dogs are an example of the dedication of Mike and Sasha to a cause they value. The Kampers have both volunteered for the Animal Rescue League for more than 20 years. Another organization that has benefitted from their volunteer time is the Beaverdale Neighborhood Association.

âWe joined over 10 years ago and have been involved in some interesting initiatives that have helped to strengthen the area,â says Sasha.

Mike has served as president for three years, was on the board for six and currently volunteers as the BNAâs bookkeeper to help them with budgeting and bill paying. I am on the Public Affairs Committee, which organizes National Night Out, Neighborhood Watch, and Tour of Homes, and on the Beautification Committee, which maintains public gardens, puts on the Garden Walk, plants trees and provides classes on tree care.â

One of the projects with which the Kampers helped extensively was the Streetscape Corridor in the downtown Beaverdale business district. Dedicated in 2015, it represents a $1.2 million investment from a collaboration of government agencies, including the City of Des Moines, Polk County Board of Supervisors, and the State of Iowa, as well as donations from local residents and businesses. It also came from the dedicated fundraising efforts of $300,000 in matching funds given by the âGroup of 9,â made up of Beaverdale Neighborhood Association members, including Sasha and Mike.

Another exciting initiative that they assisted in providing for Beaverdale residents was the NFC Program. This Neighborhood Finance Corporation program provides forgivable loans to residents of Beaverdale for home improvements. With the BNAâs strategic plan, Beaverdale was eligible and able to have $21.5 million invested in improvements of houses.

Beaverdale will soon be eligible for the NFC program again, with Sasha and Mike helping with the efforts of organization, education and promotion. If you are interested in finding out more about this forgivable loan program, watch for information on the BNAâs website: www.beaverdale.org.

âThe association is a wonderful way to meet people,â says Sasha. âThe relationships you make with the people here will last a lifetime. While we moved to a bigger Beaverdale home about 10 years ago, we still keep in touch with our neighbors from our first Beaverdale house.â

Tradition surrounds the home the Kampers currently own.

âIt has history. It was built during the 1930s and was owned by three generations of a family prior to us buying it,â says Sasha.

The house is on a small street with close neighborhood ties. Block parties, progressive dinners and BBQs are building the relationships that the Kampers mentioned.

âLastly, our house is located within walking distance of Snookieâs (ice cream shop). Need I say more?â quips Sasha. âBoth Mike and I and our dogs enjoy walking for ice cream in the summer.â ♦