Drummer Ben Barndollar transformed his unfinished basement into a rehearsal area for his band. 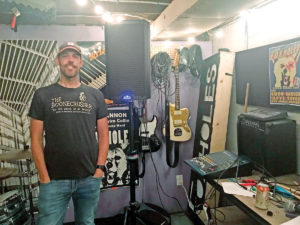 Foxholes band member and drummer Ben Barndollar made his basement into a family room for his indie rock group to practice, hangout and be creative every Tuesday. Photo by Trevor Babcock

Inside Ben Barndollarâs basement, underneath his cozy two-story home, he has made a place for his indie rock band â the Foxholes â to get together each Tuesday and channel their creative energy. Since 2014, the group has scarcely missed practice. The homeâs basement has become the bandâs âfamily room.â

Unbothered by the wailing guitars are Barndollarâs wife and 1-year-old son.

âThe neighbors are awesome,â says Barndollar, who has only had to make peace with one disgruntled listener on one occasion.

Looking for a home after marrying in 2014, Barndollarâs real estate agent was given the stipulation of finding a home with practice space for the band. Fitting the bill, the unfinished room below their home currently holds a plethora of instruments and gear compiled through the years.

Resting in the corner is a crafted sign of the bandâs name, which is featured on the cover of its self-titled sophomore album. Lining the roomâs walls are dozens of flyers from previous shows along with thrifted art and mood lighting.

âItâs kind of like a little booster,â says Villegas. âSometimes even when Iâm feeling meh, then I can look up there and go, âOh, I remember that show.â â

Without the space, the band would be paying out of pocket for an alternative. Caked in sweat, the band previously practiced in an old, unairconditioned pool house in the heat of July. Vocalist and guitarist Trevor Holt would fix a single microphone in the center of a tiny room in Barndollarâs old apartment to record demos.

âItâs important to be able to all play together and also just to be able to see each other once a week,â says Holt. âTo have a practice space or space that everybody can meet up, play and make noise and not have to worry about being kicked out.â

Flooding occasionally threatens Barndollarâs stash of instruments and music technology. Hard rain calls for an evacuation of all equipment. Luckily, not a single piece has been damaged.

âWeâve got it down to a science now,â says Barndollar. âI know exactly where every trickle of water goes.â

Providing the necessary environment, the practice space helped Foxholes achieve their goal of being a factor in the local music scene. The room is where seeds of the bandâs ideas sprout and creative juices flow. Holt remembers the room as the birthplace of their last album and EP.

Outside of the room, members of Foxholes are unrelenting with their passion for music.

âEven when weâre not down here, weâre all doing something else with music,â says Barndollar. ♦