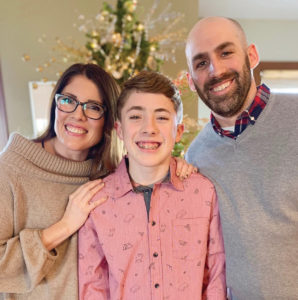 Meggan and Ryan Fox and son Johnny have strong connections to the Beaverdale community. They thought their bungalow might be a starter home, but now they are thinking it will be perfect when Johnny leaves for college.

The pig planted atop the windmill in the front yard gives you a hint of the fun and fantasy youâll find within Meggan and Ryan Foxâs home, and the cottage style windows and red front door give you an indication of the solid foundation of values that the home is built upon.

The Foxes and their son, Johnny,14, have lived in Beaverdale since 2004, and they have grown fond of the people and their neighborhood.

âIf you need a cup of sugar, this is the place you can just go and ask,â says Meggan. âWe take care of each other on the block.â

In the summer, an annual block party is held, and progressive dinners happen around the neighborhood.

âThe guys have a Broom Ball Team that plays at the Brenton Skating Plaza,â says Ryan. âWeâre called the Ice Beavers, and we always make an appearance in the Beaverdale Fall Festival Parade.â

Ryan and Meggan met as freshmen at ISU and married after graduation in 2003. His major was finance, and he currently works in corporate treasury for Principal Financial. Hers was child development, and she is a 3-year-old preschool teacher for the Westside Early Education (WEE) preschool program. Her vocation as an inspired preschool teacher is an inkling to the creativity that Meggan uses to decorate their home.

An eclectic mix of swirling words and twinkle lights, striking oil paintings and solid dark oak woodwork, built-in bookcases and image-painted furniture, the end result is a warm, cozy and welcoming environment built piece by piece and picked with love. A devotee of Betsy Peterson from Perry, Meggan has many of her decorative art pieces in their home, including a special-order tabletop painted with verse and images, outlined in black-and-white check. Meggan uses her own artistic outlet in a part-time chalkboard painting business called The Fox and the Chalkboard. She is on Facebook and Instagram under that name and also has items at the Porchlight in the East Village, where she works part time.

âMy mom was an artist, and I love to create and be around unique, original things,â says Meggan.

Ryan and Meggan are involved in the faith community of Holy Trinity and the school. Ryan has been on the board of education, and Meggan is PTO president. âAgain!â she says with a broad smile. She is also co-chair of the major fundraiser the Red Carpet Gala and Auction.

âWe love the Holy Trinity community and the closeness and feeling of love and support,â says Ryan. âIt reflects the feeling of Beaverdale generally. People who have moved away still come back for things like broom ball. They are thinking of moving back into the community for the small-town feeling.â

Their home was built in 1940, with a large living room with fireplace. They expanded the kitchen and included a dining area and large island with seating in 2012. With a finished attic bedroom upstairs, a finished basement with fireplace and two main-floor bedrooms and bath, the Foxes are happy with their home, their neighborhood and their big backyard.

âWe thought it might be our starter homeâ, says Meggan, âbut, we love it here, and, with Johnny graduating and going to college in a few years, itâll be perfect for us.â ♦