After a guest fell through the floor, this repurposing project became something special. 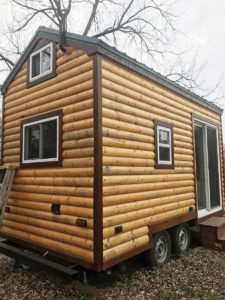 George Risius constructed a cabin atop an old camper frame.

Construction projects are nothing new for George Risius. The 63-year-old has been a do-it-yourselfer for most of his life, so, after purchasing an old camper, he knew he had the tools and the know-how to make the refurbishing process a success.

âI knew the little camper was in bad shape when I bought it,â he remembers. âSo I figured I would just do some stuff to it to fix it up. However, when my girlfriend at the time opened the door and walked into it, she fell through the floor. (Literally.) Well, I knew I was going to have to do a lot more than just fix it up, so I tore it down to the frame and then got a really neat idea,â he says.

Enter the little cabin on wheels.

âI put log cabin siding on the outside. The frame is all 2-by-4 wood, and the inside walls all are made with pallet wood that I got free from when I still worked at DeeZee. They were throwing it out, so I said I would take it. If I would have bought all this, the wood probably would have been $1,500, or so,â he says. âThe shed I built in the backyard was made from all thrown-away wood as well. Iâm retired now, and building gives me something to do.â

There isnât a lot of room in the little cabin, but Risius says it is efficient and will soon be livable.

âAll the electric works great. I just plug it into my truck, and it lights up like a Christmas tree. I am going to put a rail up to hang the ladder on so it stays stable when going up and down. The walls are insulated, and all I need is this little electric fireplace to heat it with. It was really warm last winter while I worked on it. In fact, when I was working on the loft, it became a little too warm,â he says. â I am going to put the fireplace and a television in a cubby in the corner. I think it will make the little living room nice and cozy like.â ♦