Time and memory influence the works of Chuck Hipsher

In paintings like âFall of Eden,â he comments upon technology and its effect on humanity. 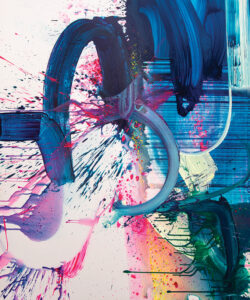 Chuck Hipsher grew up in Council Bluffs, later attending the University of Iowa and The School of Chicagoâs Art Institute. He worked in New York, Chicago and Detroit, and lately he has shown his work in New York, Denmark and at Moberg Gallery where his new show opens Oct. 8. He lives in Bloomington, Illinois, now working in an advertising agency as a designer. He admits he has been greatly influenced by Willem de Kooning throughout his career, and during his years in NYC, he âmustered the courage to pay de Kooning a visitâ at the artistâs Long Island studio. He was turned away, and de Kooning died the following year. He remains a major influence.

His âKissing Kateâ tells of a more successful celebrity encounter on a night in NYC, when Hipsher had the good fortune to meet the late Kate Spade, who was then just on the verge of selling her famous bags. The candy colors of her earlier iconic striped purses can be found in his painting â not perfect nor poised. Months after Spadeâs suicide, Hipsher was finally able to paint about his brief encounters and to let out his feeling of connectedness to her, another Midwestern transplant in the Big Apple.

Hipsher is a down-to-earth painter. Itâs easy to imagine his infatuations with de Kooning and Spade. He is usually photographed in overalls, his bald head stripping his persona down to essential details. In paintings like âFall of Eden,â he comments upon technology and its effect on humanity. He notes that âtech was supposed to make our lives easier, yet not unlike the dogmatics of organized religion, it now somehow owns us and our every waking â and sleeping â moments. The Apple is a double entendre, of course referring to both Eden and our other god, Steve Jobs.â Apples are painted realistically, in order to grab the eye and make us reflect on the hold that toys of that name have on us,

Time and memory influence the works of Hipsher in a beautiful, excited and complete manner that biographer Michaela Mullin compared to the lyrics of Stevie Wonder âsigned, sealed, delivered, Iâm yours.â Hipsher works on large canvasses that reveal âongoingness and undoing of shape and forming â its constant negotiation between creation and decreation.â Always working large, he layers his paintings into new colors and forms with his own three-dimensional tools, such as a handle-less paint roller. Mullin labels them as âportraits of hauntings, past and present, good and bad â portraits as homage and place â flashbacks that make the future as bright as solar and lunar orbs and as tactile as velvet.â

Hipsher is interested in the gesture or movement involved in the act of creating his artworks. His mind and mood drive the process from start to finish â determining color, scale, composition and, ultimately, the finished state. He believes nothing is precious, that all is subject to change and depends on state of mind during the development. His abstract paintings indicate tension between motion and rest with a vibrancy of color and stroke.

âOne might remember the milk drop or the bullet through the apple â scientific explorations of visibility, or of the capturing of rupturings â slowing speed for consumption at a point of impact.â

David Bowie is also an influence on Hipsher who first heard the singer in a childrenâs home at age 5 and said that it instantly changed him âlike a color wheel gone beautifully crazy, form almost guitar-like handles and bodies in the center of the canvas.â

These are the last two weeks to see âClaes Oldenburg: Giants, Miniatures and Dessertsâ at the Des Moines Art Center. It will play through Oct. 17. ♦