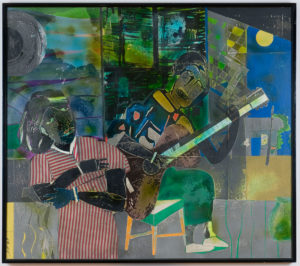 âBlack Storiesâ is the latest main galleries exhibition at the Des Moines Art Center. More than anything, it shows off the permanent collection of the museum. Secondly, it shows a new direction in the operational code of the institution. Two artists, Mitchell Squire and Jordan Weber, were co-curators. A group of Black community leaders formed an advisory committee.

One of the first things I noticed walking through the show was what was missing, namely Henry Ossawa Tanner. The greatest African-American painter of the post-Civil War era, Tanner has been in several DMAC shows over the last 50 years, and I am almost certain is part of permanent collections. He represented, better than any other artist his era, the new possibilities of success. The son of a minister, his religious art took him to superstar status, particularly in Paris where he lived and worked the last half of his life. Perhaps, his story isnât Black enough for inclusion here?

These stories begin much later and are much more interesting. One emphasis is on ingenuity, works created with nontraditional media. Co-curator Jordan Weber shows a piece from his Chapels series. It is made with earth he excavated from a Black church in Charleston, South Carolina, along with marble, wood, plastic packaging and resin. Ghanaian El Anatsuiâs contribution is a gorgeous collection of aluminum and copper wires.

Ethiopian artist Elias Sime makes his own personal beauty with woven electrical wires. It looks like a marvelous abstract painting. Joyce Scott shows a sculpture called Mistaken Identity that is made of glass beads and thread. Lorna Simpsonâs Wigs is a collection of 50 wigs that stereotype women by their hairdos. Jamaican Ebony G. Patterson makes amazingly happy tapestries out of glitter and sequins and found objects. The âUtterly Original Bill Traylorâ was born into slavery and waited 64 years to begin his art career as a homeless man, with found objects and wild visions. He would take the art world by storm after a show at the Smithsonian in 1939.

The more traditional art in the show is definitely submerged in storytelling. Jacob Lawrence is an artist who came along just a bit after the Harlem Renaissance of the 1920s, but his work was influenced by it, particularly its shapes and colors. In this show he contributes âThe 20s,â which shows Black migrant workers navigating the ballot box bravely. Similarly, Romare Bearden chronicled the Harlem Renaissance. A songwriter himself, his contribution to this show is an abstract piece of a bluesman.

Carrie Mae Weems was likely the greatest chronicler of African American life, particularly family life, beginning in the 1980s. Thatâs what she brings to this show. Kara Walker, who, like El Anatsui, was the subject of the solo show at DMAC, brings the most moving art to the exhibition. Itâs a large silhouette piece that evokes the worst horrors of slavery and Jim Crow. Alison Saar is an Angelino artist best known for depictions of Black female identity and the influences of Caribbean, Latin American and African influences on African America art. Wangachi Mutu is a Kenyan who depicts Black women in wild paintings and sculptures that suggest African religious practices.

Fred Wilson shows a piece that dominated a glass show at DMAC. Itâs a stunningly ornate black mirror that evokes the sinister identification ambiguity of Othello and Iago. Kerry James Marshall is a storytelling artist who grew up in Birmingham, Alabama, during the worst days of civil rights violations and police brutality. He is best known for depicting the gayer aspects of Black life, as he does here.

Mark Bradford is an extremely successful Angelino who mostly works in abstraction. Deana Lawson is a young photographer in the mode of Weems. She brings some sexuality to this show. Henry Taylor is a Southern Californian who calls himself a âlandscape painter who paints what he sees around him.â That means something very different from traditional landscapes.