Revenge of the drag queen

Tales are told with irony, sarcasm and understated glee. 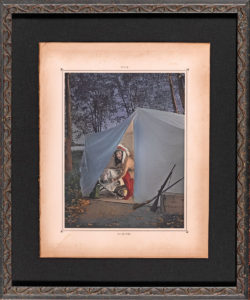 âOf Our Time: Contemporary art by indigenous people from the permanent collectionâ is the latest show at the Des Moines Art Center. Itâs also a delightful stroll through the precarious history of American Indians since the invasion of the Europeans and their manifest destiny. These tales are told with irony, sarcasm and understated glee â much more like Chief Dan George than Jay Silverheels.

Kent Monkman, a Manitoban Cree born in 1965, has the most mischievous fun. He presents a series of five Bible tales in giclÃ©e on archival paper. Each titled âFate Is a Cruel Mistress,â they depict the great bad girls of Judeo-Christian lore. The mischief is that Monkman serves as the model of each, in the drag costumes of his alter ego âMiss Chief Eagle Testickle.â Delilah, Jezebel, Judith, Potipharâs wife, and Salome are all in total charge of the men they are associated with most often.

Monkman is considered a main figure in both queer and two-spirit art. Two-spirit is considered a third gender and is represented in Monkmanâs art as a trickster, a familiar theme in much indigenous art. Monkmanâs heroines are empowered rather than judged. They are all having a lot more fun than in later parts of their stories, before Judith is rewarded for saving her people with spinsterhood and Jezebel is thrown out a window to her death.

Interestingly, Monkman has created more controversy for setting this series in the 19th century Canadian west than for mocking the Bible. Western history is apparently more revered in Alberta than the Bible. The artist intended this series to look like pages of a history book rather than modern art.

Also taking on colonialism and western religion, Jason Garcia, a New Mexican Tewa, born in 1973, presents a series on the bloody strife between Native Americans and the priests and soldiers thrust upon them. The series is called âTales of Tewa Suspenseâ and features torture, beheadings, murder, revenge and war. These silkscreens on paper are boldly colored and remindful that the Pueblo people have not always been as peaceful as they are today. Garciaâs style looks a lot like superhero comic books. The suite is arranged with the coming of the Conquistadors and Jesuits at the beginning and the revenge of the resistance at the end.

Fritz Scholder, a LuiseÃ±o who was born in Minnesota and died in Phoenix, was a major figure in the 20th century. Scholder created a modern realistic style that often included Indians in honkytonks. He is covered in this show by one of his most famous lithographs âBicentennial Indian.â This subject is dressed in clothing made from American flags and native gear. Itâs a main reason he is considered part of the Pop Art movement.

Also in the show is his âIndians with Umbrellas.â This piece of comic genius shows a break in a Hollywood western when actors dressed as Indians saddle up on a ridge protecting themselves from the elements with parasols. This piece is a perfect complement to the Monument Valley show in the same museum which considers the moviesâ role in the creation of the ideal of the Wild West.

Charles âWa-Wa-Ca-No-Pa-Paâ Pushetonequa was a Meskwaki who lived most of his life in Iowa. His gouache work âWeaving Reed Matâ was done in 1950, which was before Highway 30 was moved, cutting off the Meskwaki craftspeople from the customers that the Lincoln highway had brought. This scene is probably part of Iowa history. Small stalks of corn also remind that the Meskwaki still grow some heritage seeds of that plant that date back to the tribeâs origin.

Duane Slick is a Waterloo-born Meskwaki who has shown all over the world. He shows two minimalist monotypes inspired by his series âAria for a Coyote Opera,â which is an homage to the music of Philip Glass and the art of Robert Wilson. In both âBeaver Sings the Bluesâ and âTurtle Mountain,â the animals serve as tricksters creating a compatible ecological situation with other flora and fauna.

Jaune Quick-to-See Smith is a Rocky Mountain Kootenai. Her lithograph and collage Indian Heart employs an old food label of a romanticized Indian and a boy dressed in a flag. Those are contrasted with plants, animals and symbols of native culture. ♦