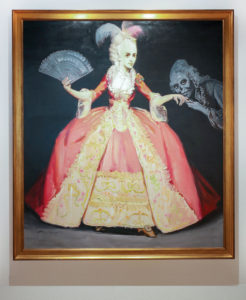 After writing about art in Des Moines for more than 30 years, I marvel most at how much things have become more cosmopolitan. Nothing illustrates this more than Moberg Gallery. When they opened 15 years ago, they were an all-metro gallery. Every artist in its first show was a local. They became an all-Iowa gallery, then a regional one and then a national gallery. Their latest show, Lianjie Zheng/ Inter/ National Contemporaries, takes them to the world-wide level.

Lianjie grew up during the Cultural Revolution and began his studies in traditional ink painting, Chinese calligraphy, and poetry very young. In 1986, Zheng founded one of the earliest painting schools in Beijing, the Beijing Earth Calligraphy and Painting Art School. After the Tiananmen Square protests of 1989, he became more engaged with art that resisted the traditional and conservative artistic languages. He works in or straddles the categories of photography, performance art, video, calligraphy, installation and contemporary ink painting. In 1996, Zheng emigrated to New York City, where he continued investigating experimental calligraphy and ink painting. Between 2004 and 2008, he returned to China annually to make a pilgrimage to the holy Taoist Mount Hua, a sacred mountain in Shaanxi province â experiences that changed his artistic philosophy and approach.

Zheng has exhibited worldwide and has given talks at institutions, including Harvard and Columbia. Zheng currently divides his time between New York
and China. He has spent time in Des Moines during recent years, and having exhibited at Plymouth Church, a Just Peace Church, Zhengâs work has become well known among educators, artists, scholars and collectors in Des Moines.

The award-winning architects of Spiller and IDEAA along with Christensen Development are putting the finishing touches on the new Steven Vail Fine Arts
space on the ground level of the Fitch Building, across the street from Exile brewery and restaurant. The previous second-floor public gallery space in Historic
Teachout Building opened well over a decade ago as a collaborative effort between Vail and legendary architect and arts patron Kirk Von Blunck.

âKirk and I tore up the business model of the conventional Des Moines/Iowa art gallery and went for broke. We had an absolute ball â and Kirk would have
certainly wanted that ball to keep rolling,â said Vailof his move. Focusing exclusively on museum quality prints, multiples and works on paper, past exhibitions have even included solo exhibitions of works by Chuck Close, Sol LeWitt and Henry Moore as well as group shows featuring works by internationally celebrated artists including nearly all of the artists included in the
John and Mary Pappajohn Sculpture Garden. Business has been conducted nationally and internationally and the company also stands as the only bonified certified art appraisers in the State of Iowa.

Open now, but too late for our deadline, Queer Abstraction at the Des Moines Art Center is the first ever exhibition at the DMAC to focus exclusively on queer sexuality and gender identity. This is a group show in multiple media that implicitly refers to queer desires, alternative identities and related histories. It
plays through Sept. 8. ♦