Look closer, before itâs too late 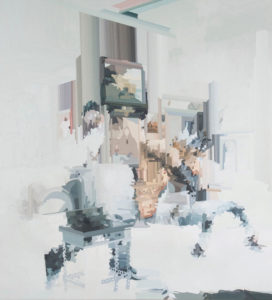 âAll that we see or seem, is but a dream within a dream.â Edgar Allen Poe

Des Moines lost its most celebrated artist when Alex Brown died at his home on the penultimate day of January after an aneurism at age 52. Brown attended Roosevelt High School here before graduating in Plymouth, New Hampshire. He began undergraduate studies at New York University and finished at the Parsons School of Design. He quickly established himself in New York as a young painter worth watching and also as a hard core punk musician.

His paintings gave new perspectives to ordinary images and âfound photographs.â A viewer literally had to find the right place to stand and view Brownâs paintings to figure out their subject matter. A New York Times review of an early show described him as “an inventive young New York painter (who) combines photorealism and Vasarely-style abstraction,” achieving “a tension between abstraction and illusion in his pictures that is most arresting.” That it was.

Brown showed primarily at the much-respected Feature in New York, as well as internationally, with several solo shows in Cologne, Paris, Geneva, Tokyo, Brussels and elsewhere. He was a recipient of the Rosenthal Family Foundation Award of the American Academy of Arts and Letters. He returned to Des Moines in the late 1990s because of cheaper rents here. In Des Moines, he also produced several notable works of public art. His work is included in the permanent collections of the Museum of Modern Art, New York, the Des Moines Art Center, and various other institutions.

Brownâs endeavors in the punk scene included membership in the infamous bands Gorilla Biscuits, Side by Side, and Project X in the late 1980s and early 1990s. His obituary also called him âa prodigious producer of zines and flyers.â After a CBGB benefit show in 2006, Gorilla Biscuits began playing again and toured widely throughout the world with the band to a devoted following.

A memorial will be announced at a later time.

The Des Moines Art Centerâs latest big show, âSusan Collis: Without you the world goes onâ is the first American museum exhibition by Scottish artist Susan Collis. Her works, like Brownâs paintings, force the viewer to look at the work several times, from different points of view to ascertain the subject. Nothing is ever just what it seems

Those old work overalls? Look carefully for the embroidered thread. The piece of red cedar and applewood with walnut veneer? Move your gaze and notice the powdered lapis lazuli and silver. The wooden stepladder might be dismissed as part of the installation hardware. Yet close inspection reveals mother of pearl, coral, freshwater pearls, cultured pearls, white opals and diamonds. A pine plank could be part of a cheap coffin, minus the ebony sliver and platinum. A wooden broom is garnished with diamonds, opals, turquoise and tourmaline.

Other pieces are made with handwoven linens, cashmeres and tweeds. There is a series of graphite drawings where inverted graphite seems to drip meaning into paper. The point, as I see it, is that first assumptions should never be trusted. What looks cheap, utilitarian and ordinary is hiding treasure in its least observed recess.

This is the kind of show that instructs children how to learn to look at things. âWithout you the world goes onâ will play, in three different galleries, through May 12.

Des Moinesâ most popular painter, Chris Vance, will have a new show up at Moberg Gallery by publication time. âNot Quite an Architectâ takes an abstract look at iconic structures like drive-in theaters. This will play through April 20. ♦