A German genius in Des Moines 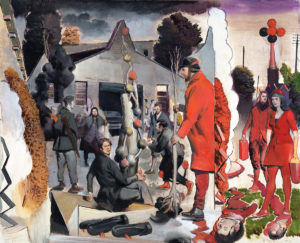 Neo Rauch is one of Europeâs most interesting and wealthy painters. Orphaned as an infant, he grew up in the old East Germany, near Leipzig. He has lived life from both sides of the wall and its rubble. He was in Des Moines recently for âNeo Rauch: Aus Dem Boden,â his first museum show of the drawings he uses as models and inspiration for his paintings.

Having said that he has harbored some nostalgia for the GDR, we asked him to clarify.

âI only meant that regarding art education, particularly for painters. They used to demand excellence before calling yourself a painter. Today, education is general, and everyone is an artist. As far as everything else, I now live in the best Germany in history. Now itâs the best system; donât forget that for a moment,â he explained.

Hearing him say that this was his first ever trip to âthe middle,â we asked what he liked best about Des Moines.

âThe antique stores. They are amazing. We donât have the same kinds of antiques in Europe. I was amazed to be surrounded by stuff I had never seen before. Totally unexpected,â he said, using a phrase the Des Moines Art Center (DMAC) has adopted.

âDes Moines and Leipzig are similar. Perfectly sized to me. We have everything we need in Leipzig without the ugliness of big cities like Berlin or New York,â he said.

Has he ever had a desire to move to Cologne, the so-called German art town, or Italy like many other European artists have done?

âNo. Cologne is an art town. I am a painter not an artist. I am not interested in art. Everyone is an artist today. I could never live or work in Italy. Itâs OK to visit, but thereâs too much harmony, beauty and sweetness there. Germany is the Fatherland. Italy is the Motherland. Fatherland has higher expectations. Itâs always a good idea to live where you grew up,â he explained.

Rauch was 5 weeks old when his parents, 19 and 21, were killed in a train accident. They were both art students. Recently, Rauch exhibited in a show with his fatherâs paintings.

âThat was quite meaningful,â he explained.

He said he lived in a small town with his grandparents and did not return to Leipzig till he was 22.

âWhen I was 29, the wall came down,â he told us for perspective.

Is there an American spot on his bucket list?

âMIT has a laboratory for inventors. I would like to visit there,â he said. âNeo Rauch: Aus Dem Bodenâ will play through Jan. 6.

This yearâs DMAC âIowa Artistsâ exhibition is a solo show by Dubuqueâs Jen Bervin. Her show âRiverâ maps the Mississippi from the headwaters in Lake Itasca to its delta south of New Orleans. Over the course of 12 years, the artist sewed the 230-curvilinear-feet-long sculpture by hand, including each of the thousands of reflective, silver sequins that densely cover the surface. She thinks that it took the same amount of time to sew each section of the river as it would take to walk the real one. The scale of the âmapâ is 1 inch to 1 mile. âRiverâ is presented on the ceiling of the I. M. Pei building from a geocentric perspective, as if viewers were inside the Earthâs interior looking up at the river bed. This show will play through Jan. 27.

âThe space between: truth, fiction and the artistic imagination,â for which Larassa Kabel was curator, showed at Moberg Gallery last month. She did so with this in mind: Art, as a constructed reality, tells truth through a fiction, though that telling is only an offering.

An excellent catalogue, written by Michaela Mullin, made sense of that. Two artists I met in Moberg debuts when they were still teenagers, Stephanie Brunia and Noah Doely, were spectacularly included. Both are now professors of art, at Iowa and UNI. Two of Iowaâs best painters, Sarah Grant and Scott Charles Ross, open an exhibition at Moberg Nov. 2. ♦