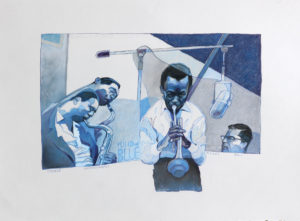 Kelley has illustrated a number of classic books, including âThe Legend of Sleepy Hollow,â âRip Van Winkle,â âPoeâs Tales of Mystery and Imagination,â and âMacbeth for Young Readers.â He has had one-man shows at numerous museums including the Academy of Art in Cincinnati, The University of the Arts (Philadelphia), Lustrare Gallery (New York), The Kentucky Derby Museum, Creation Gallery in Tokyo, and the Pablo Neruda Cultural Center-Bagnolet in Paris, France. Group shows include: The Norman Rockwell Museum (Stockbridge, MA), The Chicago Art Institute, The Museum of American Illustration (NY), School of Visual Arts (NY), The McNay Art Museum â San Antonio, Mystic Seaport Museum (CT), and Librarie Nicaise in Paris.

If you arenât familiar with Kelleyâs name, you likely have seen his art. Itâs usually recognizable from the detailed context he provides â like the Hotel Del Coronado and Marilyn Monroe (from âSome Like It Hotâ) in the Wilder stamp or the Maltese falcon and Humphrey Bogart in the Huston one.

Large murals have intrigued him lately. Known for his mural of famous authors in many Barnes & Noble stores, he recently did a series of some 70 murals for the remodeled Barnes & Noble on 5th Avenue at 48th Street in New York City. Most recently he completed a mural for Googleâs new data center in Council Bluffs. In it, Kelley connected images of Council Bluffâs early communications and data history â the cooperation between Lewis and Clark and the native Americans of their time, the building of the railroad and the telegraph â with the new data center of contemporary times. Itâs amazing how much aerial views of rail systems look like computer hardware.

For a close look at Kelleyâs portraits of mostly famous musicians, Moberg Gallery is showing several of his works as an attachment to the current Chris Vance show. Also exhibiting at the gallery is some new work by Lucas Underwood, an artist of amazing patience who creates intricate compositions out of clippings, from maps and other data. These shows will play through April 14.

The Des Moines Art Center will have two new shows by press time. A Yayoi Kasama exhibition will complement the Sculpture Parkâs newest masterpiece by the same artist. A print gallery show will include the sultry works of Grant Wood… Olson-Larsen Galleries will introduce a new show in mid-April with Mary Merkel-Hess, Ken Smith and Laura Berman. All work in organic forms… Steven Vail Gallery has received some new, humorous prints by French artist Laura Prouvost… Mary Mattingly, who is included in the Des Moines Art Centerâs current âWanderlustâ exhibition, will speak at the DMAC on April 12 on the subject of âThe Supply Chain and the Sublime…â Luther Utterbackâs hometown, Nashua, Iowa, was given an $80,000 grant through Iowaâs Living Roadways Community Visioning Program; the money has been designated for construction of Utterbackâs unrealized design, titled âDream Project.â ♦