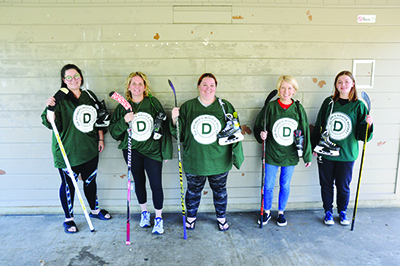 Des Moines Womenâs Novice Hockey Club is a group of âamazing womenâ who want to learn more about hockey. But they arenât interested in only accruing knowledge by being hockey moms or hockey wives or by simply watching hockey. Instead, these women are lacing up skates and slapping some shots of their own.

Initiated in the summer of 2021, the club aims to grow the sport with new or fairly new female players from in and around the Des Moines area. The undertaking is the brainchild of Katie Doyle, who first started playing in 2019.

âIâd played in the Wild adult (co-ed) hockey league,â she says.  âBut then I thought itâd be fun to play with other women.â

Doyle put her idea out there to see if others felt the same, and it turns out she wasnât the only one. Not by a slap shot.

So far, the league largely consists of women who have had family or friends play the sport or who have otherwise been affiliated with the hockey community, but anyone is welcome. The group is diverse and boasts participants ranging in age from 15 to 60-plus.

Initially, more than half of the participants had never used hockey skates before, let alone a full complement of hockey attire.

Getting the necessary equipment can be expensive. To make the initial buy-in palatable, the league has benefitted from the Central Iowa D League, which donated enough to outfit 15 people or so. They arenât on their own when it comes to putting this gear on, either. They help each other out.

âWe share the same locker room, and we all laugh together,â says Doyle.

Practices are led by Katelyn Kerns, the leagueâs designated head coach. Warm-ups include a round of âdrills and skills.â After that, itâs time to split up into teams and face off for games.

A similar womenâs-only team from Omaha recently visited to take on the new Des Moines club in an exhibition on Oct. 2 at the new Rec Plex in West Des Moines.

But thatâs OK, at least for now. The group is improving rapidly.

âSome of our women didnât know how to put equipment on prior to joining the league,â she explains.

Still, more and more are wanting to play, and the future looks promising. The hope is to expand to four teams next year and to have set teams instead of choosing sides weekly. If you or someone you know is looking to lace âem up and fulfill an ice hockey dream, you can find the group on Facebook.

âThis has been one of the most exhilarating things Iâve ever done,â says Doyle. âTo put on skates at age 45. … It has been great to see an amazing group of women and young ladies come together.â ♦